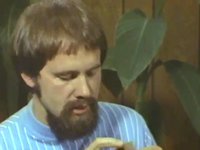 Less structures, in a sense, than experimental prototypes anticipating some of the advanced geometric models of today’s most high-powered graphics packages, Resch’s models were supremely functional, spatially bewildering, and totally, totally awesome.

In many ways it seems oddly short-sighted of the world that Resch’s work would, in the end, be most remarkable for resembling children’s toys — from folding snakes to Rubik’s cubes — rather than kicking off a brave new world of weird, inter-dimensional furniture and shapeshifting buildings that Resch’s work implied would be only a few years away.

A Reschian city of expanding arches and pinched, fractal canopies, where walls become structures and whole neighborhoods are just by-products of massive contraptions, would be a delirious thing to live within, and Resch himself always had his eye on the architectural implications of his work.

In the film embedded above, for example, he describes a waffled, geometrically complex surface that, when combined with sound-absorbing materials, would make an ideal acoustic wall for dampening sound and enhancing privacy. Resch himself was constantly working on new forms of self-supporting origami that might someday pass for buildings.

In any case, the whole film is worth watching — but get yourself a stack of paper before you begin, because you’ll be itching to fold your own mathematical shapes and infinite surfaces in no time. [Vimeo]