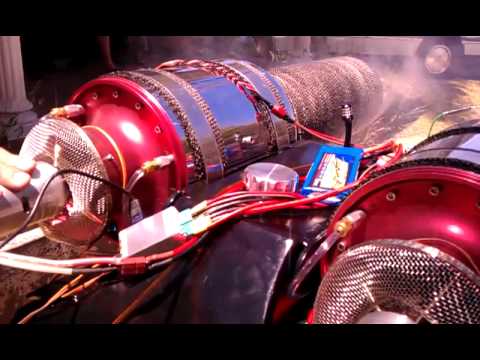 Most of us are happy with regular modes of transportation: trains, trams, cars, bicycles, time-travelling phone boxes. You know, the usual. Brave is the person who decides that strapping a jet engine — with afterburners — onto a man-sized skateboard is not only a good idea, but one he or she should actually ride upon… without meeting a grisly end.

Despite the insanity, this is the dream of Sydneysider Daz Fellows, who’s strapped not one, but two turbines to a carbon-fibre street luge, in the hopes of setting a new world speed record. Ben Wojdyla of Road & Track caught up with Fellows and asked him a bunch of questions, including just how powerful this maniacal luge is:

The maximum thrust of a single engine (five-minute rating) is 202 pounds, with maximum continuous thrust of 176 pounds and approximately an extra 38 percent with the afterburner at full burn. Combined, the two engines produce approximately 537 pounds of thrust with afterburners. They run on Jet A-1 fuel.

Steering is done by leaning, just like on a skateboard. Braking is done with my feet—no mechanical braking is allowed if I want the official Guinness land speed record for a powered luge. Wheels are snowmobile drag-racing wheels, and I run 12 of them under my board. The body of the board is 9.8 feet [3m] long and 2 feet [0.6m] wide, and it’s 100 percent carbon-fiber composite with a carbon-fiber fuel cell holding approximately 1.3 gallons [4.92L] of fuel. The entire board itself is basically a molded fuel tank with turbine engines, on which I lie.

Fellows has recorded several tests of the turbines, one of which you can watch below:

If you’re in the mood to build one yourself, or just like the idea of owning some jet turbines, Fellows has a store front where you can purchase his hardware.