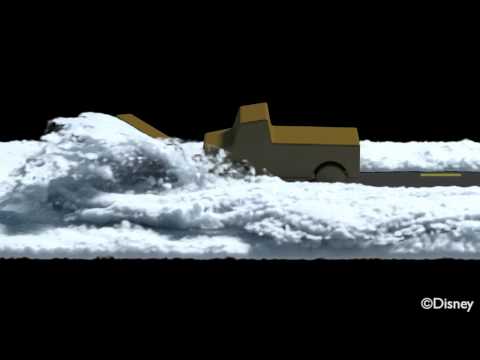 (Unfortunately, the person doing the presentation speaks very quickly in parts, making it difficult to understand the concepts — which are already tricky to get a hold on.)

While the video here was published early this month, it looks like the source is a SIGGRAPH 2013 presentation from July entitled “A Material-Point Method for Snow Simulation”. The tech itself is a group effort from Disney Animation Studios and researchers from the University of California and involves “combining a Lagrangian/Eulerian semi-implicitly solved material-point method with an elasto-plastic constitutive model”.

Which is way above my head, but I will definitely be cracking that sentence out at the next party I attend, because I enjoy repelling possible sources of social interaction.

So, why would Disney be interested in this sort of thing? 3D animated movies are big money these days and being able to simulate natural phenomena such as water and snow without an army of artists can save studios a lot of time and money. For instance, this particular implementation is used in an upcoming Disney feature called Frozen.

So, the animation industry has water, fur and now snow covered. What’s next? Probably best to keep working on not making people look like zombies.