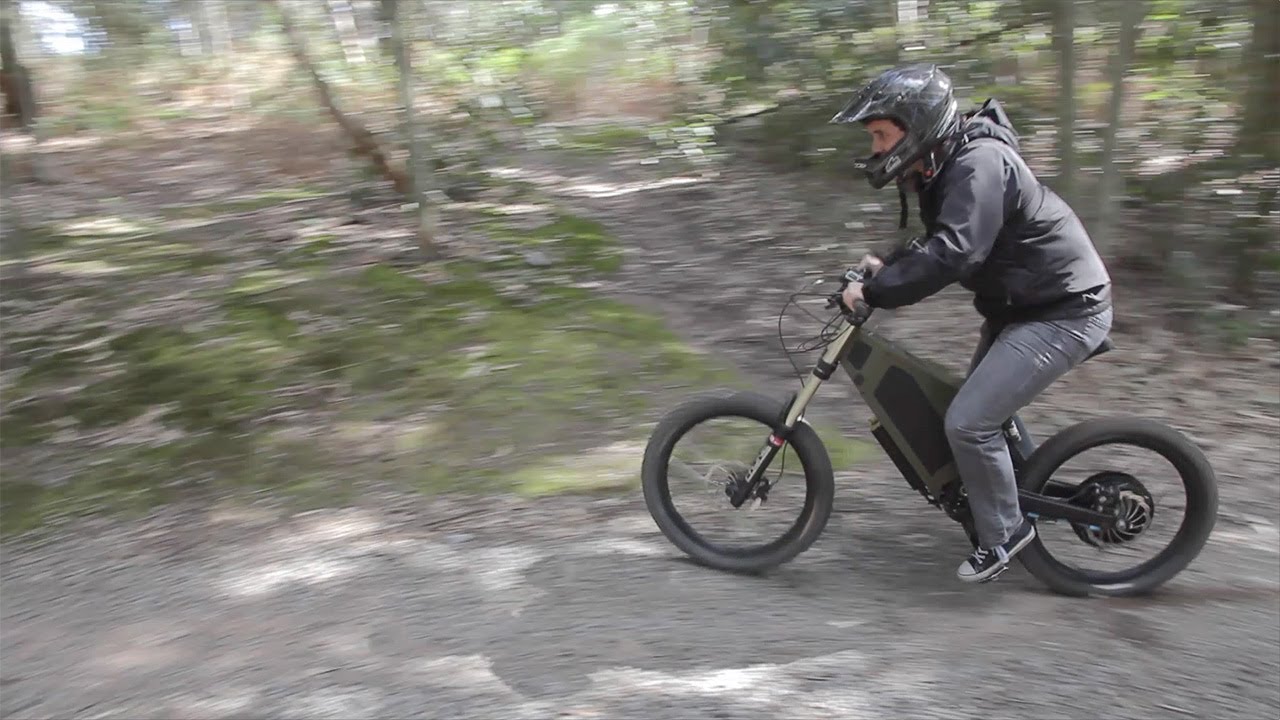 The word “genius” gets thrown around a lot these days, but very rarely is it as deserved as it is for John Karambalis who, after eight years of work with a few school mates, has become the Sir James Dyson of the bike world. Meet Stealth Bikes: the world’s best electric bike, made right here in Australia. Watch us take it for a spin!

[related title=”Gizmodo Adventure Rides” tag=”adventure-rides” items=”5″] The Stealth Bike (stealthelectricbikes.com.au)
is more than just a bicycle with a fancy name. It’s a custom featherweight frame onto which a bespoke, Australian-made brushless motor is added to the rear wheel.

The crossbar then becomes the home for unique battery technology and an LCD screen to tell you just how fast you’re going and to regulate your ride.

Finally, the handlebars are outfitted with your front and rear disc brakes like on a real motorbike, and a throttle collar designed to give you more power than pedalling could ever give.
[clear]

The weather in Melbourne is freezing today. We’re here because Stealth Bikes’ secret engineering facility is based somewhere around here. We’ll find it eventually. In the meantime I keep reading my notes and hoping today turns out with me looking cool on a bike and not with my face in the gravel.

What makes the Stealth Bike special, other than the fact that it’s an electric bike that can do 80km/h, is the motor and battery technology that get it there. The brushless motor is attached to the rear wheel, and it’s the secret sauce of Stealth Bikes. It’s so secret that we’re not allowed to know what’s inside. The other side of the ingenious Stealth Bikes coin is the battery technology. The batteries themselves are made up of lithium-iron phosphate, unlike other electric bikes on the market which use other materials like cadmium and nickel in their power sources. These innovative batteries mean that the Stealth Bikes can recharge from flat in around 2 hours and belt along at 80km/h for a full hour before running dry again.

The awesome batteries paired with the clever motors mean that the Stealth Electric bike is the best e-bike in the country, perhaps even the world.

Like most brilliant Aussie inventions, the Stealth Bike was first invented in an backyard. John Karambalis is the man with the plan when it comes to Stealth Bikes, and together with his school friends — also bike enthusiasts — they went on and founded the company we know today.

We finally pull up at the backlot where the Stealth Bikes workshop is cleverly concealed. It’s on an industrial estate in suburban Melbourne, hidden behind an unassuming roller door inside a building that is probably older than anyone who works here.

As I keep reading my notes, however, I find out that this cluster of 1980’s buildings mean more to the company than just office space. John actually started out as a mechanical and aerospace engineer working for the motorbike company next door to where the Stealth Bike offices are situated today.

He was working full time on various projects, but still wanted to go riding with his dirt bike mates after work. Push came to shove and the biking fell off his schedule in favour of work commitments, and John started falling out of his peak physical condition. He needed a way to keep pace with his mates. They rode everyday, but he had been relegated to a weekend rider. Necessity being the mother of invention, the Stealth Electric bike was born.

Now a new pace had been set, both for John’s friends and for innovation: nobody could keep up with the Stealth Bike.

John kept taking the design back to the drawing board and improving upon it, experimenting with different items in the market to perfect the bike. Different motors, metals and components are thrown around his backyard shed for years, until this workshop in Melbourne was brought to life.

Now, there are three Stealth Bikes on the market: the Fighter, the Bomber and the Hurricane. The roller door ascends into the roof as we step in and inspect the fruits of John’s labour. Workers with familiar faces buzz around the floor; dirt bike champs of new and old. One of the guys working on assembly, for example, goes by the name of Josh Callan. He’s currently ranked number-six in the world for BMX and he spends his day job working at Stealth Bikes.

After exchanging pleasantries with some of the Stealth Bikes crew, we finally straddle one of the models and start pedalling.

“Now, be careful,” says Theresa. She’s their sales manager. “These things have a kick,” she warns with a slight smirk on her face. Not really sure what to expect from that, but I start pedalling out in the car park of the factory before mustering up the courage to pull the throttle collar back and see what makes this bike so special. The bike kicks into life with a silent jolt, lifting the front wheel off the ground a few centimetres before the speed of the back wheel throws the bike back onto the solid asphalt. Suddenly I’m no longer pedalling: I’m just watching the world fly by as my speed increases.

The brushless motor starts to whir behind me as I change up the pedal gears and keep pushing forward.

I’m one of the least fit guys I know, and I’m currently going this fast on a bike?! The motor now works to propel me forward even faster as I twist the collar back hard for another dose of speed.

The motor now sounds like a swarm of bees chasing my back wheel. The roar is incredible and the speed is intoxicating.

I release the throttle and begin to slow before I hit the wall. It came up so fast I had no idea it was even there to start with. My pupils are wide and my hands are clenched still as I remove them from the handlebars.

That was just on a road, imagine what it’s like on a downhill stretch?!

Half an hour later, my fears from earlier in the day are staring me in the face: kilometres worth of downhill track ripe for the Stealth Bike, and it’s here where the two-wheeled speed gadget shines.

On the uphill sections, you learn to moderate your pedalling by using the throttle in short bursts. On the approach to a jump, you fire off the throttle for a dose of extra speed to get you an exhilarating amount of air-time. On the corners, the disc brakes lock just enough to give you a great looking slide, and the whole time, you have the biggest smile on your face you’ll ever have.