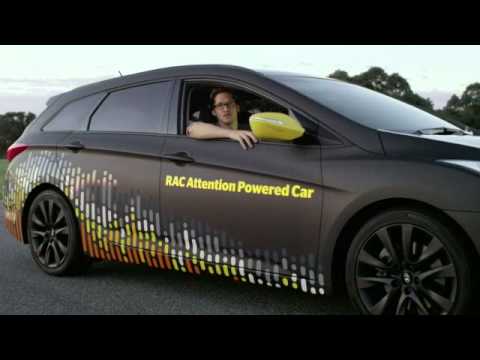 The Royal Automobile Club of WA (RAC) has debuted the world’s first “Attention Powered Car” – a vehicle that will only run at full capacity when the driver is paying attention. On the plus side, the technology could potentially save your life. On the downside, you’re required to wear a neuro headset gizmo while driving…

The Attention Powered Car was designed by the RAC in a bid to reduce the number of road deaths in Australia. According to a recent study conducted by the Monash University Accident Research Centre, around 46 percent of fatal crashes are caused by inattention on the road.

The RAC’s ambitious solution to this problem combines a gyroscope, GPS and accelerometer with a neuro headset that communicates with custom software on the fly. The result is a car that automatically slows down when it senses a drop in the driver’s attention. The headset measures brain activity to determine when the brain dips below the ‘mentally engaged’ state while driving and adjusts speed accordingly.

The technology is reminiscent of those Japanese brainwave-detecting cat ears — however, the RAC version has been designed to save lives rather than to make cosplayers and furries look more appealing.

Unfortunately, we can see this being a barrier to style-conscious people. We suspect it’s probably not the most comfortable thing to wear either. Having the speed of your car suddenly change could also throw up potential safety issues of its own. Thankfully, the RAC will be testing its prototype on roads around Australia over the following months. You can follow its progress at the Attention Powered Car’s official website