DEFCON: A Documentary About The World’s Largest Hacking Conference 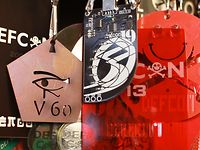 DEFCON was held for the 20th time in 2012 in Las Vegas, Nevada and it was the first time the conference gave a documentary crew full access to the hacking event and allowed them to film the entire thing. Here’s a bit of the description of the documentary written by the director Jason Scott:

The film follows the four days of the conference, the events and people (attendees and staff), and covers history and philosophy behind DEFCON’s success and unique experience.

The premiere of DEFCON: The Documentary actually happened on August 1st on the first day of DEFCON 21. The full documentary is up above on Vimeo for your streaming pleasure. You can download the official 720p torrent if you’d like or watch it on The Internet Archive too.

Read more about how the documentary was made at Jason Scott’s website here. If you have any interest in hacking, you should probably give the doc a shot. [ASCII]