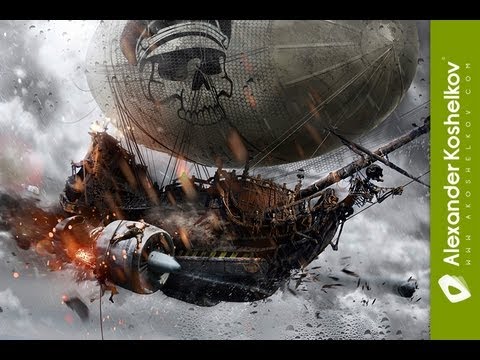 The clip is basically a time-lapse of the wallpaper’s composition from start to finish, a feat the originally took seven hours and 18 minutes. The final work is called “Airship of Doom” and was put together using Photoshop CC and a Wacom Intuos 5 tablet.

Even sped up, it’s easy to make out each step Koshelkov takes to craft the image, from taking stock photos of boats and cloning out the people on them, to transforming a regular jet engine into a flaming hunk of blasted metal.

The wallpaper itself, a massive image weighing in at 6400 x 3600 pixels, is available for download if you’d like it to grace your desktop.

Koshelkov has actually done this a few times and you can check out his other time-lapses on his YouTube channel.