This Weird Zombie Short Is Actually A CPR Instructional Video 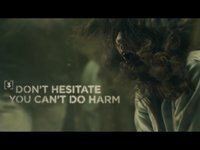 The Undeadening is a three-minute zombie short film that sees a woman trying to escape the zombie horde in an abandoned city. Little does she know, cities are the one place you want to avoid during the zombie invasion.

After escaping one shuffler down an alleyway, she finds herself trapped on both sides and passes out after suffering a heart attack. That’s when the helpful zombies — not wanting to eat a cold meal, clearly — go to work.

The video then goes from a Walking Dead spoof into a full on instructional video about how to deliver CPR when someone suffers a heart attack or stroke. It’s actually really good, and something you should all know.

Now if we could only get a PSA about not catching zombieism, that’d be great.