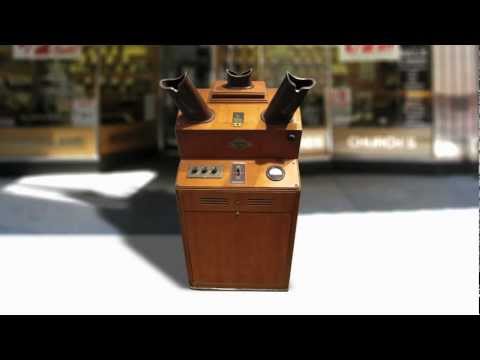 Have you heard about these newfangled X-ray machines? We should put ’em in everything! We should literally use them to X-ray people’s feet to fit them for shoes.

Smallish wooden podiums housing radioactive material for casual-foot X-rays, shoe-fitting fluoroscopes started showing up in shoe stores around the 1920s. At first the X-ray wielding boxes were seen largely as gimmicks, but eventually they came to be respected as valuable shoe-fitting tools, instead of feared as the leaky cancer boxes they actually were. Into the 1950s, the retrospectively horrifying nature of the things was mostly being brushed off, even in scientific studies:

“The shoe-fitting fluoroscope is not an instrument with obviously hazardous potentialities. It has long been used and no direct clinical evidence of harm has yet been established.”

At the oblivious peak of popularity in the early 1950s, there were at least 10,000 of the machines in the United States and kids loved ’em. What kids wouldn’t, right?

But as time crept on, it became clear that these devices were not only leaking radiation all over the place, but were also a pretty dumb way of fitting shoes. By the 1970s, shoe-fitting fluoroscopes were almost universally banned, but damage had already been done; foot cancer began to rear its ugly head in many older patients, and there was little question of what was to blame.

It shouldn’t be surprising that there’s a history of X-ray abuse just a few decades in the past, but it’s positively terrifying to look back at it knowing what we know now. It makes you think twice about carrying that phone so close to your baby-makin’ parts. But, hey, we’ve all gotta die sometime. Let’s just hope we can still reproduce before we do. [h/t Reddit]