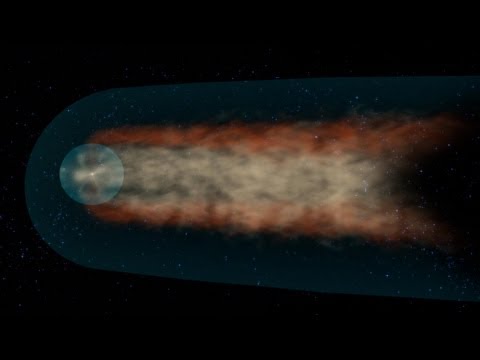 The new data is thanks to NASA’s very own Interstellar Boundary Explorer (IBEX), which has been sitting some 200km out from Earth, painstakingly mapping the edges of the solar system. IBEX watches for formerly-charged deep-space particles that crash into the heliosphere’s outer hydrogen atoms and come shooting back towards us. And by mapping out three years-worth of those suckers, IBEX has whipped up the first, pixelated images of what our tail looks like.

The tail’s mostly made up of solar wind plasma and a magnetic field that extend forever outward behind the solar system, eventually merging back into the unremarkable blackness of interstellar space.

With more incoming data from IBEX and more number-crunching by the lab coat wearers here on Earth, we’re bound to find out more about this mysterious comet-like tail years down the line. But for now, it’s cool to know our little corner of the universe is its own shooting star.