How To Grow A Human Heart 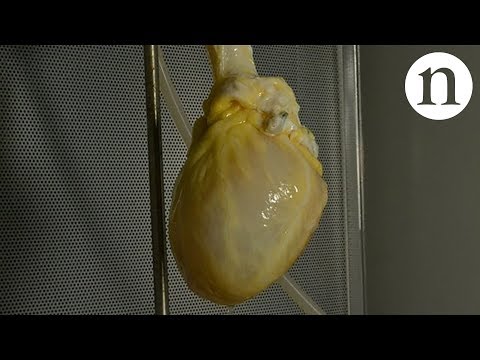 Right now, researchers are trying to marry two different scientific accomplishments: growing healthy, beating heart cells and growing simple hollow organs like bladders. The idea is to try to get a healthy beating heart to grow itself around structural shell. The best shell right now is a human heart from a recently dead body.

Using a chemical bath, researchers wash away any living cellular material, leaving behind a shell of structural protein. Imagine you’re gutting an old building and leaving behind just the walls. Once you’ve got the old and unwanted cellular material, the scientists simply redecorate the place with healthy cells matched to the patient’s immune system. Poof, a new healthy heart that won’t be rejected by the transplant patient’s body. Easy.

OK, so that simplified explanation makes a complicated procedure sound like knitting a scarf from a pattern. As the story points out, growing a heart you can transplant into a human body is still basically fantasy. The organ would have to be flawless. As one scientist says, there’s no room for error. Still, goals like growing pieces of damaged organs could actually result in treatments in the foreseeable future.

A bioengineered valve, for example, may last longer than mechanical or dead-tissue valves because they have the potential to grow with a patient and repair themselves. And other organs may not need to be replaced entirely. “I’d be surprised if within the next 5–7 years you don’t see the patient implanted with at least part of an artery, lobes of a lung, lobes of a liver,” says Badylak.

Beat on, science, beat on. [Nature]