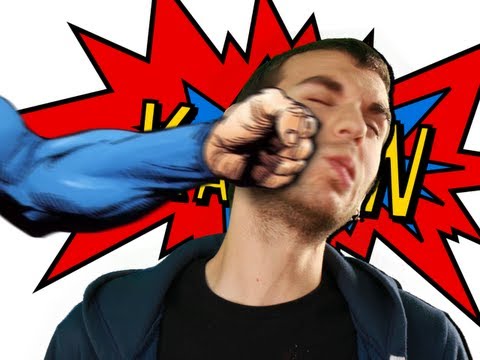 Getting smacked in the noggin is an upsetting experience at the best of times, but being on the receiving end of a haymaker delivered by the world’s most recognisable superhero would be like, the worst. Leave it to Vsauce to run the numbers and figure out just how badly it’d ruin your day… or more accurately, everyone’s day.

This particular hypothetical is broken down by Jake of Vsauce3. Given the fluctuating nature of Superman’s abilities, thanks to the various writers who have penned his adventures over the years, a few conditions have to be established. For example, we have to put aside the fact that Superman has the power to punch dimensions and limit his punching speed to 99 per cent of the speed of light.

With these limits, the power behind the man of steel’s fist works out to be 45 megatons of TNT, which would do horrible, terrible things to your body. But don’t worry! Superman would be utterly stuffed afterwards, having burnt 45 trillion calories in the endeavour.

Not that you’d actually see said punch. From the clip:

It takes about one centisecond for the light that hits your retina to then be processed by your brain. So, since the punch is travelling at near the speed of light, it would only take 3.4 nanoseconds for the fist to get to you. So you literally wouldn’t see it coming.

The full video above covers the aftermath of this unfathomable punch and is well worth watching.