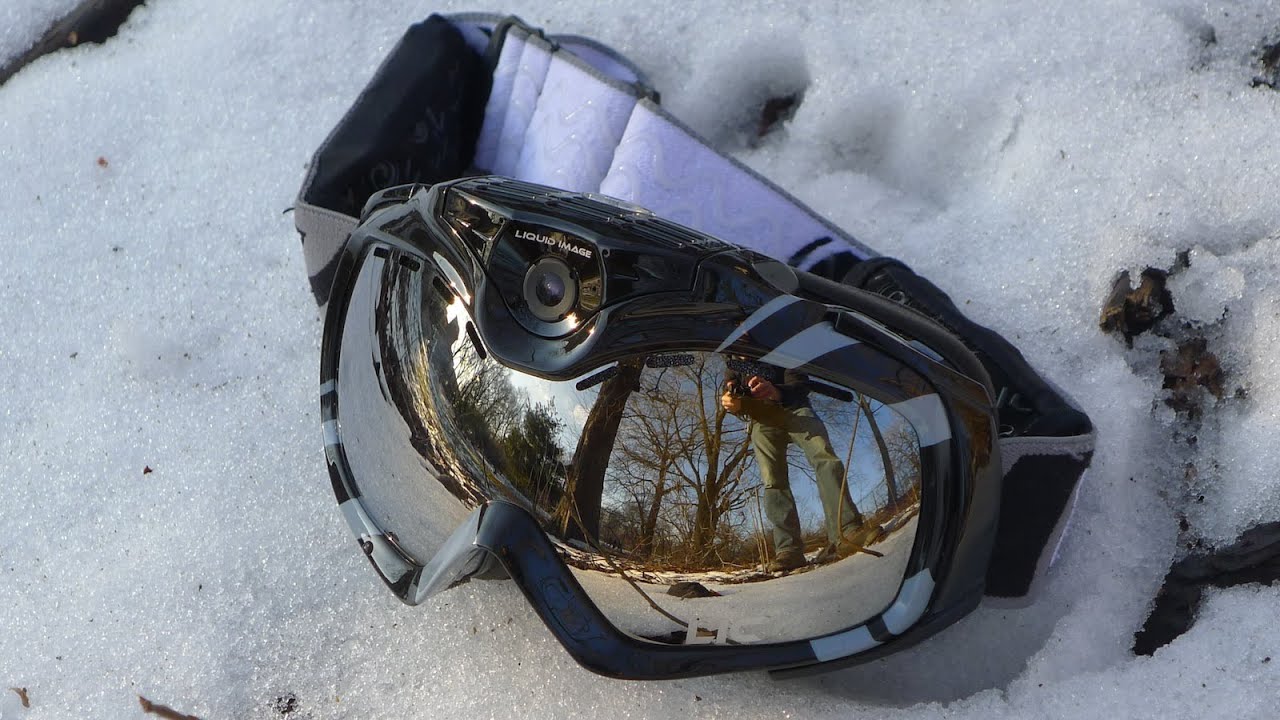 It will be winter soon, which means you’ll need an action camera to take with you on the slopes. However, there are some drawbacks. What if it falls off your helmet? What if the angle is too high or too low? Those are the sorts of problems Liquid Image tackles by building an action cam right into your snow goggles. And it comes so very close to solving them.

People whose only sport is skiing, snowboarding or snowmobiling, and who want to record their point of view without buying a separate action cam and mount.

They look like a pair of snow googles, but larger. The camera lens sits in the centre of your forehead like a video bindi. The battery and controls are stuck on a little panel embedded in the side of the strap. There are two buttons for toggling between shooting modes. You can swap the battery and SD card in or out fairly easily. It comes with two interchangeable lenses (for your eyes, not the camera): Black Ionized & Amber.

It’s not 100 per cent intuitive, but once you read the instructions, it’s very easy. Slap the goggles on your face, press one button to turn the camera on and then toggle through modes. There’s a tiny LED in the top of your field of view which tells you how many fps you’re shooting (depending on colour) and whether you’re recording or not. That’s actually a wonderful feature. We used the Wi-Fi capable version, which enables the Apex HD+ to work with an Android or iOS app. From there you can monitor your shot, change settings, and start/stop recording.

Convenience. You’re already going to be wearing goggles. Not having to worry about attaching anything else is really sweet, and you’re never worried about it falling off and getting lost. Plus, the glowing light you can juuuust barely see in the top of your vision eliminates the worry that you might not be recording.

There’s a lot of funk in the video. The colour balance is excellent, but there are major problems. For starters, look at how it handles changing light levels. There is a very harsh “stepping” effect as it gains up and down constantly, resulting in a kind of flickering image. Now look at the trees in the first part of the clip. It’s got some serious moiré pattern going on, which is very distracting. And, finally, if you pause on the split screen, you can see that the GoPro Hero 3 Black just captures way, way more detail. The Apex HD+ looks pixelated by comparison, despite that fact they were shooting at the same resolution and frame rate.

These goggles are definitely bigger, heavier (319g), and bulkier than normal snow goggles. Look how much of my face they cover! I wore these with four different helmets this winter, and found that about half the time they didn’t match very well. The helmet would kind of push them down my nose, which wasn’t particularly comfortable. They fit reasonably well with other helmets, though, so you may just have to try a few until you find a good match.

Probably not. It’s just way too specialised. Yes, it’s convenient, but with a detachable action camera there are a lot of different ways you can mount it to get really awesome shots. With the Apex HD+, you’re limited to your own point of view, and you’re especially limited to one specific set of activities (you wouldn’t wear snow goggles while biking down the street, probably). Considering they’re the same price, you’ll get a lot more bang for your buck with the GoPro Hero 3 Black Edition. [Liquid Image]