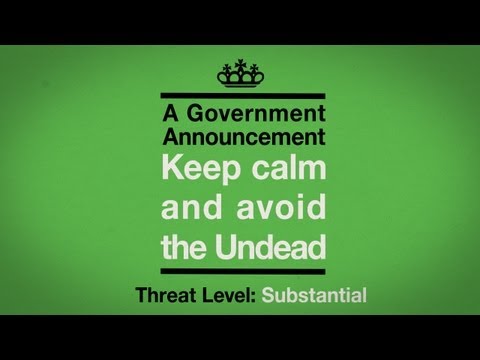 In a year or so, we might very well be inundated with zombie TV shows or, at the very least, post-apocalyptic ones. Even the BBC is trying out its own undead-themed show, called In The Flesh and its marketing strategy is what you might describe as classically British.

Inspired by the “Keep Calm and Carry On” posters of the late 1930s, the ad explains via a near monotone female voice the recent “rising” of the freshly deceased and the actions one should take if surrounded. The ad itself is a little on the bland side, but I’m sure its serious, deadpan delivery would raise eyebrows when seen on regular television.

What isn’t mentioned is the premise of the show, though according to an article on Blastr, it’s not so much about killing hordes of zombies as it is an examination of the “social and political ramifications of reintroducing domesticated zombies back into the populace”.

I guess you could call it the UK’s answer to The Walking Dead, but to me, the show has more in common with 2006’s Fido, starring an initially unrecognisable Billy Connolly. In The Flesh sounds like it’ll adopt a serious tone, whereas Fido was a comedy through and through.

Blastr mentions a March 17 release in the UK; not sure if or how it’ll be screened locally.