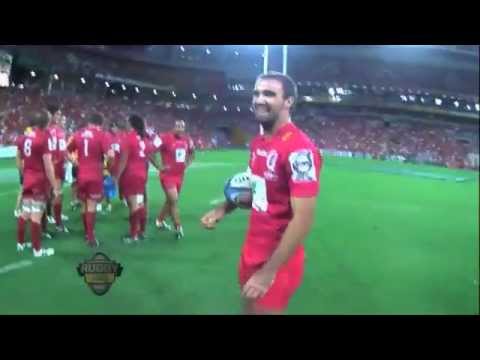 Sporting codes are always looking for new ways to make television coverage of the game more interesting, and the latest addition to Australian rugby coverage is incredible. It’s called RefCam, a stripped-down action camera and RF microphone that broadcasts what the referee sees, says and hears on the pitch directly into a viewer’s lounge room. The best part is that it’s set for its second outing tonight.

RefCam was introduced by Fox Sports Australia a few weeks ago to cover the game between the New South Wales Waratahs and the Queensland Reds.

A camera is attached to a headband that slides over the back of the match referee’s head, while a small camera sits atop his left ear. Combined, the RefCam broadcasts pictures and crisp sound to at-home viewers.

Because the referee is always at the centre of the action on the pitch, rigging a camera to broadcast what he’s looking at seems like a no-brainer. The referee not only chastises players, but he gives them tips, tells them how a play should go and what they’re doing wrong.

The CEO of Australian Rugby told the Rugby HD program that he was cautiously optimistic about the new camera gear.

RefCam will have its second outing tonight in Brisbane as the Queensland Reds take on the New Zealand Hurricanes.