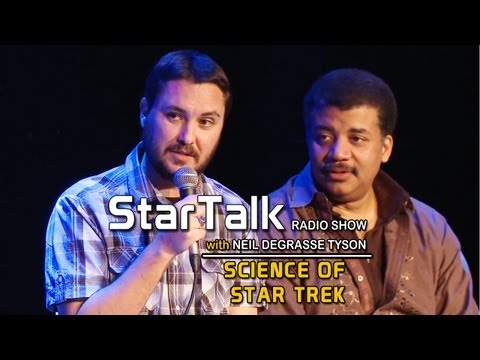 The show is at its most interesting when Wheaton shares anecdotes about his time on The Next Generation and when deGrasse Tyson has a chance to discuss real science. The comedians — Eugene Mirman, Paul F Tompkins and Kristen Schaal — often detract from the conversation, interrupting the flow of a fascinating topic.

I’d have preferred to have just Wheaton and deGrasse Tyson on stage, as they seem more than capable of injecting humour when it’s needed. For example:

Tyson: Why did he [Jean-Luc Picard] have a French name, but he spoke with a British accent?
Wheaton: Well, probably because sometime between now and then Britain probably just storms across the channel and occupies France. What, you thought they built the tunnel for convenience? I mean, listen, there are plenty of websites on Geocities devoted to exposing this conspiracy.

It’s not side-splitting material, sure, but it’s plenty for this sort of show.