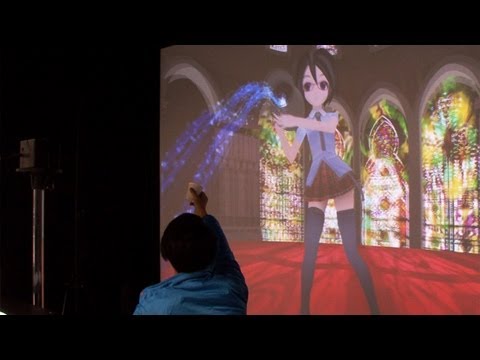 To interact with the VR character a user wears a set of 3D glasses enhanced with a magnetic sensor. This allows the system to calculate the person’s line of sight, so that no matter where they’re standing the 3D effect is adjusted on the fly to be convincing. And when holding a cup, the user can even capture the virtual water, at least they think they are, thanks to convincing vibrations and sound effects.

But why is the virtual character the company is using in the demo dressed in a scandalous schoolgirl uniform? There’s obvious potential for the use of this technology in theme parks and interactive rides and such, but the company is dropping subtle hints as to what they think it could really be used for. And quite frankly, it’s exactly what everyone assumed virtual reality would be really used for all along. [DigInfo]