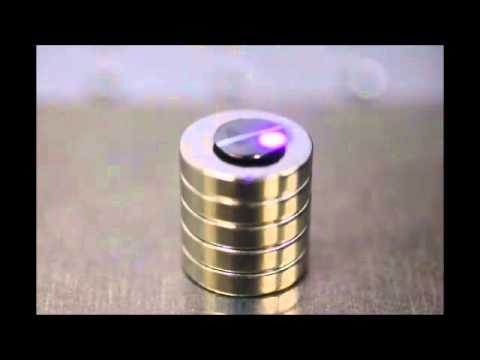 Lasers are cool. Things that hover are cool. This is both. Developed by researchers at Aoyama Gakuin University, this little magnetic hover-disc is powered by magnets and driven with lasers.

The magnetically levitated graphite disc in the video above, while cool, isn’t exactly new. It’s simply balanced atop a magnetic field, allowing it to float. The new part is the ability of the laser to spin the disc, or drive it around. When the laser hits the graphite disc, it causes a slight temperature change, and the way that affects the magnetic field allows it to be led around like some kind of tiny, hovering, laser-pointer obsessed cat.

What are the potential applications? Some sort of hoverboards maybe, or perhaps some kind of solar turbine. Whatever the case, practical use of stuff like this is probably a way off, but damned if it doesn’t look cool right now. [Mashable]