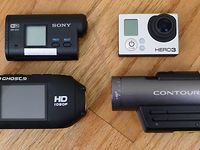 As you see in the video above, we tested the cameras in a variety of situations. We strapped three to a surfboard (the Drift wasn’t yet announced) and surfed the leading edge of Hurricane Sandy. We set up static shots on the Gawker rooftop at different times of day. We tested each camera’s various frame rates, still modes, and features. And then I strapped all four to my helmet and biked around Brooklyn (that rig, plus the Movember ‘stache, elicited a lot of weird looks). Then we picked through the footage like the video-geeks that we are. Spoiler alert: none of these cameras objectively suck.

Note: The video above was compressed for the web. Watching it in HD helps. But some stuff doesn’t come through as clearly as it does when uncompressed on a nice display.

An included remote control can start/stop a recording, and (theoretically) change modes. It’s the only one of the cameras that can zoom, but it’s digital zoom, so you’re best to avoid it. Besides, a two-inch screen under Gorilla Glass makes framing shots and adjusting settings much easier. An optional looping feature can store video in a temporary cache — if you’re on a long ride, and something unexpected happens that you want to save, you tag it, and only that moment is recorded. Best of all, its battery life was easily the winner, coming in at two hours 46 minutes in our 1080p rundown test.

Unfortunately, the Drift still feels unfinished. The remote control is supposed to light up differently when recording. It didn’t, nor could it switch modes. This can probably be fixed in a firmware update, but even with these features working, it isn’t nearly as detailed as the GoPro’s remote. Smartphone apps are not yet available, nor are some accessories, like the waterproof housing that will let it go down to 55 metres. At 170g, it’s the heaviest of the group, which makes strapping it to your head rather awkward.

But the biggest problem is that image quality still isn’t up there with the others. There isn’t as much detail. Look at the moire effect on the bricks in the first shot. In the second bike shot, look how green it skews. It’s easily the worst in low light, with more noise than Ozzy Osbourne in a blender. It can do 720p at 60fps for half speed slow-motion (when played back at 30 fps), but that’s only half what the GoPro and Sony can do. Also, they have improved but somehow not completely fixed that high-pitched shrieking tone in the audio. How did that not happen yet? Still, a definite improvement over last year’s.

It can shoot video at 720p/120fps, but it automatically saves the files at 30fps for 4x slow-motion. That eliminates the need to do it in editing and makes it very easy. It’s the only one that has an image stabilisation option, and while it significantly degraded video quality, it might be worth it in really bumpy situations. Using image stabilisation or one of the higher frame rates also crops the image to a narrower 120-degree angle. It has the most sensitive mic of the bunch, as it is the only one with a stereo mic. It can actually be a little too sensitive in many cases. There is a time-lapse mode, but no burst mode, and fewer frame-rate options for video than the others.

Colours are generally very accurate, and it handles contrast pretty well, but image quality just isn’t what it should be. The centre of the image is usually pretty sharp, but the sides get very blurry. It supposedly has the same 170-degree viewing angle as the others, but it actually looks much wider. That would be a good thing, but objects are smaller and more distorted. Also, the side of your head is inevitably in your shots. Low-light images are fairly bright, but they are very noisy and you loose the sharpness. We expected better from the Exmor R image sensor.

You can’t rotate the lens at all, which means you can only mount it straight up and down, and the rounded bottom means it can’t stand up without a mount (few of which are included in the box). When I took it surfing, first there was a mysterious card error, so no footage was captured. Worse, a little bit of salt water got into the included waterproof case. Not enough to kill it, but it I definitely wouldn’t trust it at the claimed 60m. Also, you can’t adjust settings when the case is on — just start/stop. It’s the only camera of the four with questionable build quality. It’s a good first-effort from Sony, but there is work to be done. Full review here.

Part of the Contour’s beauty is its simplicity: You flip the big switch forward, and it’s on and recording. The lens rotates 270 degrees so you can attach it to things at any angle. There are a wide variety of mounts available, and it is the only camera in the group with built-in GPS. It has a built-in Bluetooth and the smartphone apps worked well. Using the app (or one on your computer) you have a high level of control over the camera, including exposure, contrast, sharpness, and metering point. At a respectable two hours on the nose, it came in third in our battery test.

There are some downsides, though. For starters, when a mount snapped while skateboarding in our original review, we figured it was probably a fluke — but the same thing happened when I was surfing. If I hadn’t tied it to the other two cameras with string, it would be at the bottom of the Atlantic right now.

The surf shot illustrates another good point. Look how low the angle is. While you can pan it side to side, the mounting system doesn’t allow for vertical tilt adjustments. You can’t use the 170-degree wide-ange if you’re shooting at 1080p — you’re limited to 120 degrees — which is crazy. At 157g, it’s very heavy, and its weight causes it to wobble in an elastic head-strap.

Image quality is strong enough to push it to second place, with some big caveats. Colour accuracy is toward the back of the pack. There isn’t much noise in low-light shots, but that’s because the images are so dark you can’t really see anything. The mic quality is pretty bad too.

As far as usability, doing anything other than toggling between two preset modes requires you to connect to your computer or a smartphone app. I’m all for simplicity, but not being able to adjust any settings is absurd. Full review here.

Wi-Fi is built in, and while the smartphone apps aren’t yet ready for the Black Edition, the included Wi-Fi remote control works extremely well from as far as 60 feet away. The remote screen mirrors the camera screen, so you know exactly what you’re switching to. You can choose from lots of options on resolution, frame rates, burst speed, time-lapse rate and more. Most of those can be selected on the camera itself using the LCD screen (which doesn’t display images). It also has the looping video feature that the Drift does.

The Hero 3 is the smallest and lightest of the group, making it easily the most comfortable to wear. There are a ton of mounts and accessories, including various “BakPaks” that give it an LCD touchscreen for viewing video, or a boost in battery life. It comes with a bunch of mounts, and a waterproof case for 197 foot deep adventures.

It ain’t perfect though. Take a look at those two bike clips. Despite the fact that all the cameras were shooting simultaneously, the GoPro looks like it was at shot dusk. The others look like more like footage from the actual time — 11am. This is because the Hero 3’s metering can be a bit off. It seems to adjust for the brightest thing in the frame, and everything else gets pushed down.

The Hero 3 can flip its image on the horizontal access, but the lens doesn’t rotate, so you can’t adjust to off angles. That really needs to be fixed in the next version. The apps (for smartphones and desktop) were not yet updated for the Black Edition, so we couldn’t get into the minute details (for exposure, contrast, etc) which aren’t available on the camera. Speaking of, while we love how tweakable it is, there are so many settings that flipping through them with the camera’s two buttons is a pain in the arse.

The biggest gripe, however, is battery life. The Hero 3 tapped out at just 88 minutes. That’s third place — the Contour was 32 minutes better, and the Drift was almost twice as good. Totally unacceptable. Had it not been for this flaw, this probably would have been a 4.5-star product. Still, this is far and away the best product here. Your Battlemodo winner is simply way ahead of the others. Full review here.