Holy Crap, Someone Made A Real-Life Pixar Desk Lamp 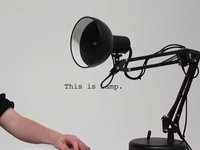 Powered by an Arduino, a hacked webcam, a mechanical iris and a set of servos to move it about, the lamp seems curious of its environment, particularly humans, thanks to software that recognises and tracks faces. It even appears to be capable of playing peek-a-boo, looking rather distressed when it’s not getting attention from someone sitting nearby. And it hates being put to sleep, so it will adorably switch itself back on when you try to power it off. OK, that part’s a little creepy.