Monster Machines: Mach 6 Scramjet Could Fly From Sydney To Perth In One Hour 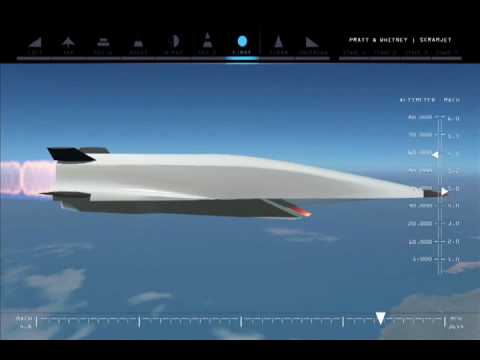 We could have had Osama bin Laden in 1998. However, in the 80 minutes it took for a volley of cruise missiles travel from US ships in the Arabian Gulf over to his training camp in Afghanistan, he had done packed up and left. If those warheads had been riding on the new X-51 hypersonic jet engine, they would have made his day much worse in just 12 minutes.

Currently, the only missiles in the Pentagon’s armoury that can reliably hit a remote target within an hour or less are ICBMs — you know, the ones with the nuclear nosecones that the US still probably has pointed at Russia. These are huge, expensive missiles capable of destroying swaths of foreign territory, and they often have way too much firepower for what the situation requires. But they are magnitudes faster than our next fleetest option — cruise missiles. The X-51A Waverider Scramjet engine will bridge this service gap. Not only will it grant the US military the ability to strike targets anywhere in the world within minutes, it could also revolutionise trans-oceanic air travel.

The $US140 million X-51A, developed by Boeing, is the latest iteration among the DoD’s decade-long, $US2 billion effort to develop sustained hypersonic flight — one of six similar programs currently being nurtured by the Pentagon.

The 8m long, 1800kg X-51 relies on Scramjet (supersonic combustion ramjet) technology — a high-speed derivative of the Ramjet engine. Ramjets and Scramjets both rely on the engine’s wicked fast speed to compress air for combustion. However, unlike Ramjets, Scramjets don’t forcefully decelerate the incoming air to subsonic speeds before combustion — the air travels through the engine at hypersonic speeds. This allows Scramjet engines to operate at massively faster speeds than Ramjets — theoretically as high as Mach 24 (that’s 24 times faster than the speed of sound). Compare that to the world’s fastest ramjet, the Pratt & Whitney J-58 aboard the SR-71 Blackbird, and its paltry cruising speed of just Mach 3.2 (3380km/h) or the Concorde’s pokey Mach 2.

Boeing began ground tests on the X-51A in 2006 and performed its first unpowered test flights in late 2009. By May 2010, the X-51A had successfully flown its first powered flight test. The second test flight in March of last year did not go as well. The rocket failed to separate from its booster rocket and splashed down. A third test, performed recently at Point Migu over the Pacific Ocean, failed as well. This time, a faulty cruiser controlling the fin caused the engine to break apart in mid-air less than a minute after launch.

As with all of its test flights, the X-51A first hitches a ride aboard a B-52’s wing up to 50,000 feet before disengaging and plummeting back towards the ocean. It will freefall for roughly four seconds before a booster rocket ignites and accelerates it to Mach 4.5 in just under 30 seconds. From there, the booster will disengage and the X-51A’s own scramjet engine will take over. It first burns ethelyne, then transisitions into burning JP-7 rocket fuel — the same stuff the Blackbird uses. The X-51A will hopefully run for 300 seconds, reach Mach 6, and climb as high as 70,000 feet before disintegrating and falling into the Pacific.

“Attaining sustained hypersonic flight is like going from propeller-driven aircraft to jet aircraft,” Robert A. Mercier, deputy for technology in the high-speed systems division at the US Air Force Research Laboratory in Ohio, told the LA Times. “Since the Wright brothers, we have examined how to make aircraft better and faster. Hypersonic flight is one of those areas that is a potential frontier for aeronautics. I believe we’re standing in the door waiting to go into that arena.”

In addition to giving the military worldwide quick-strike capabilites, it could fundamentally change air travel. “The business community who wanted to be in New York in three hours made Concorde highly viable, and now there’s interest on both sides of the Atlantic to jump a generation and go from supersonic flight to hypersonic flight,” vice-president of business development at EADS, Peter Robbie, told the BBC. “Such an aircraft will be very expensive, of course, because of the enormous amounts of energy that is required to get to such speeds. But the idea of going from Tokyo to Paris in two and a half hours is very attractive for the business and political community — and I think that by about 2050 there may be a viable commercial aircraft.”