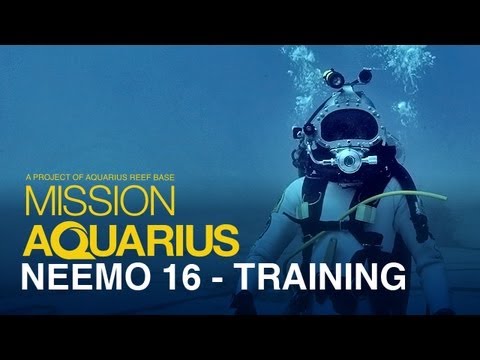 The astronauts are wearing white suits with American flags and mission patches on them. They’re aware but unworried about the hostile environment inches away from their noses. They’d be dead in seconds if it were not for their air supply. As they bound nimbly along in a state of near-weightlessness, all each astronaut can hear is breathing.

And the underwater speaker blasting commands for the astronaut to dive.

Research that is done from the Aquarius Reef Base is important to ocean science, sure, but what very few realise is that NASA uses the underwater habitat to test out gear and procedures that will be used in orbit, the moon and even Mars. In terms of its hostility, beauty, remoteness and gravity level, the sea is not unlike space. The program is called the Extreme Environment Mission Operations, or NEEMO for short. Last month, NASA conducted its 16th mission at Aquarius.

The missions, which started rolling in 2001, are the closest things we have on Earth to dress rehearsals for actual space missions. Some highlights from the program’s 11-year run:


Landing on an asteroid turned out to be a lot like rock climbing — aquanauts had to clip in and use rope systems to navigate rock walls that NASA brought in as approximations of asteroid surfaces. But sometimes it was more like base jumping, with aquanauts needing to practice “free flying” techniques. They compared what it was like to perform certain tasks regularly to performing them with the aid of simulated jetpacks — sounds high-tech, but those are basically propellers attached to air tanks. Surprisingly, some preferred the tasks without jetpacks.

NASA also tested out some new open-source technologies that will allow for lower cost rovers, like the OpenROV submarine, which costs a few hundred dollars and is being designed to reach 100m of depth.

In addition to its low gravity, Aquarius makes for an ideal space simulation environment because of psychological factors. Most notably: surfacing is not an option. Once you’re acclimated to the high-pressure conditions in and around Aquarius, there is no way out until nearly two weeks later: the mission’s end.

“In the greatest simulator in the world, you could spend all the money that you want, but you cannot trick the human mind,” says Bill Todd, the NEEMO project manager and a long-time astronaut training supervisor. He lived for a week at Aquarius with three others during the first NEEMO session back in 2001. He adds, “Physiologically or psychologically you cannot trick it into thinking that it truly is in an extreme environment. You can shake it, you can rock and roll it, and bump it. You can have the greatest visuals in the world, but the guy knows that he’s going to get a coffee break in 40 minutes and it’s all good. That’s not the case in what we’re doing.”

The reality of the conditions at Aquarius and its environs play into stress levels and behaviour. Conditions also force everyone to deal with the inevitable glitches that arise — just as they would have to if they were in a galaxy far, far away. “We’re constantly battling the little demons, just like we do in space,” says Todd. “That’s what makes it real.”

“We know what it’s like to be in a space suit, we know what it feels like to be in zero gravity,” says Tim Peake, a European Space Agency astronaut. “The water let’s us do that.” Peake was speaking from inside the habitat a few days into the NASA group’s most recent mission. “So we can really put ourselves in the position where we’re on an asteroid surface and try out these tools and techniques and really evaluate what works and what doesn’t work and how we’re going to do these tasks.”

And that’s why astronauts hope to keep coming back to Aquarius. And why we need Aquarius to exist, for the sake of not just ocean exploration, but space exploration too.

Journalist Ben Hellwarth is the author of the new bookSEALAB: America’s Forgotten Quest to Live and Work on the Ocean Floor.