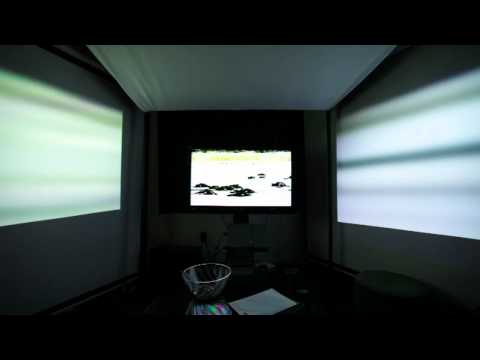 And instead of simply stretching the video image to completely fill the area the viewer can see, the Infinity-By-Nine system, developed by Daniel Novy and V. Michael Bove Jr., uses custom software that generates and renders a real-time extension of the image on either side of the TV. Because the viewer’s peripheral vision is never in focus, the extensions being generated only have to be crude blobs and blurry shapes to sell the effect. Which also means the Infinity-By-Nine system can run on consumer-ready hardware, instead of requiring a room full of state-of-the-art supercomputers.

In the lab’s tests the system has helped draw the viewer into the on-screen story and universe. And it has even been found to create the illusion of feeling other sensations, like heat when an on-screen explosions feels like it’s completely surrounding the viewer. So just imagine what it could do for the Food Network. [MIT Media Lab]