What If Syncing A Smartphone Was As Simple As A Tap? 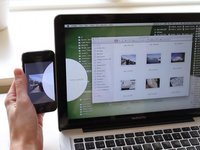 Tired of the near-impossible hassle of figuring out how to sideload web content onto his ereader, designer Ishac Bertran conceived of a UI design — inspired by spatially aware objects, such as Sifteo cubes — which would allow him to easily transfer content to devices.

This obviously isn’t for the mass offloading of files (you’d be holding your hand up for what would seem like an eternity), but rather for a quick bit of info — a photo, a map, a song. This is more a concept for the noobs than the power users. In theory, a user would hold up their portable device to their computer, and a visual link in the form of a circle, would spill onto both devices, signifying they’re connected and ready for data transfer. From there, one could drag files from the desktop to the home screen easily.

It’s elegant, simple, and most of all, has visual cues which are actually helpful. [Ishac Bertran via Co.Design]