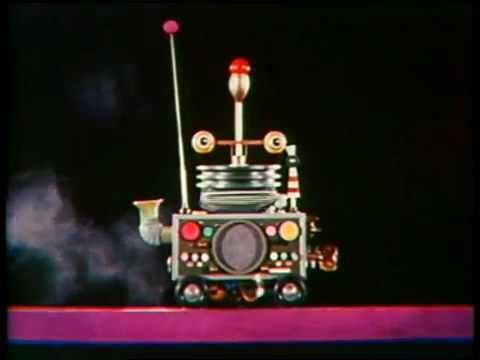 Long before Futurama’s Bender was giving humans an earful about their countless inadequateness, we had this little guy, courtesy of the indomitable Jim Henson. Yes, he’s adorable, in a shiny metal sort of way, but inside that cute exterior rests a punch card packed with insults.

According to AT&T, the robot appeared at a 1961 food fair in Germany before taking on its role here as the smallest, smarmiest construct to every wield an extendible antenna. The short was played at an “an elite seminar given for business owners, on the then-brand-new topic — data communications”. Henson was recruited to put it together, but, oddly enough, his involvement was not mentioned during the seminar.

The video’s page on YouTube provides a litte more insight into the clips planning and execution:

The organisers of the seminar, Inpro, actually set the tone for the film in a three-page memo from one of Inpro’s principals, Ted Mills to Henson. Mills outlined the nascent, but growing relationship between man and machine: a relationship not without tension and resentment: “He [the robot] is sure that All Men Basically Want to Play Golf, and not run businesses — if he can do it better.” (Mills also later designed the ride for the Bell System at the 1964 World’s Fair.) Henson’s execution is not only true to Mills’ vision, but he also puts his own unique, irreverent spin on the material.

From the opening slide whistle to the last, indignant shot of steam, it’s a loveable piece of Henson magic. Speaking of slide whistles, can someone tell me why they’re so hilarious?