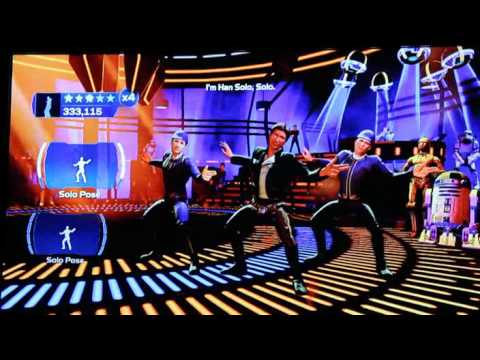 You’ll never forget the first time you hear a Jason Derulo song, my old boxing trainer once told me. He was right. But he’d never anticipated this — the meeting of our civilisation’s two greatest cultural forces. Dancing Han Solo.

What is there to say about this bonus feature in the newest Star Wars gaming title? The Kinect has reached its greatest pinnacle — forcing you to dance along to a Cloud City party scene like something from a disturbed 4chan fanfic novella. Lando does a move called “The Speeder”. Han Solo mouths along lyrics like:

Yeah, I’m feeling good tonight,
Finally feeling free and it feels so right, oh.
Time to do the things I like,
Gonna see a Princess, everything’s all right, oh.

Is it “funny”? Maybe. Maybe if you get off on cheap parodies. But there’s real art here. Space is an empty place, even in the midst of a galactic rebellion. So what does it show that Han, Lando and the rest of the gang are all able to put tension aside and just dance? There’s a lesson here — a true moral, strong as carbonite.