When Art And Science Meet, You Get Fancy Sculptures That Cast Multiple Shadows 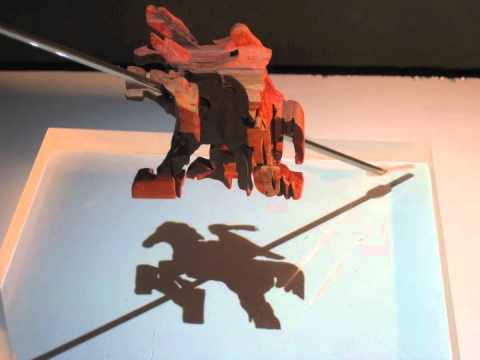 Wood and light. That’s all scientist and artist John Muntean needs to create these nifty shadows. It all looks straightforward — until you realise the models can be rotated to display a new shadow, with some capable of casting three completely different images.

Yes, it’d be much easier if he just made the shape he was after directly and shone a light down on-top of it, but where would the fun be in that? His art is inspired by “magic angle sample spinning”, according to his personal site, a technique that “mechanically simulates a molecule tumbling through space”.

How does this apply exactly to his art? The oddly-shaped models are carved so that they cast three independent shadows when light hits them from above, with the model itself rotated about 55 degrees. The real magic happens when the models are rotated so they cast different shadows — with Muntean’s “Angel Witch Ballerina” being a good example.

As Muntean’s blog so aptly puts it: “Perspective matters“. Hard not to agree!