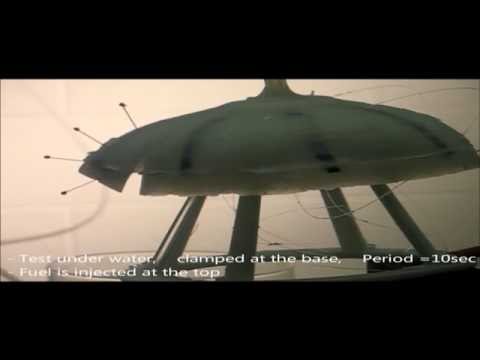 The US Navy has developed a robotic jellyfish nicknamed the Robojelly that’s powered by the water it swims through. So as long as there’s water in the oceans, it can perform search and rescue or exploration missions indefinitely.

Robojelly uses artificial muscles made from materials known as shape memory alloys that can be warped but will always return to their original shape. This allows them to perform simple expansion and contraction motions similar to how a jellyfish’s muscles allow it to swim.

The artificial alloys that make up the muscles are wrapped in carbon nanotubes and coated with a black powder made of platinum. When exposed to the oxygen and hydrogen in the water, a chemical reaction occurs with the powder coating that produces heat which in turns powers Robojelly’s muscles.

Because jellyfish are mother nature’s least intimidating creation, the Navy realises its robotic version isn’t going to strike fear into its enemies. But since they can run autonomously with a near unlimited source of power, the Navy could literally flood the ocean with these innocuous underwater spies keeping an eye out for lost ships, or even intruders. [IOP Science via BBC via The Verge]