This Is The Smallest Race In The World 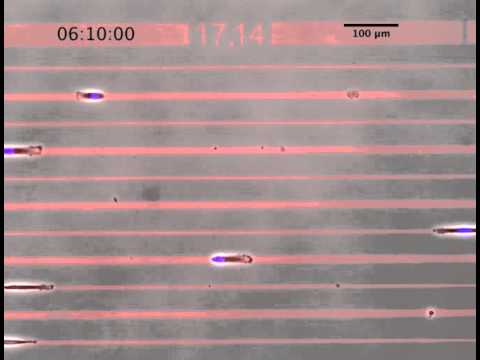 A group of crazy and wonderful scientists have organised the World Cell Race. Fifty lab teams from all over the world sent their microscopic pilots to race against each other. The winner: a bone marrow stem cell line from Singapore.

They beat everyone else accelerating to 5.2 microns per minute. That’s 0.000000312 kilometres per hour. Yes, the smallest race in the world is also the slowest one.

The microbiology teams sent their 70 frozen cells lines to laboratories in Boston, London, Heidelberg, Paris, San Francisco and Singapore, were they were placed in special race tracks 400 microns long. The tracks were coated with a substance that give cells traction to move.

They recorded the race for 24 hours, like Le Mans, and timed 200 cells of each type to see which was the fastest one. Apparently — according to Manuel Théry from the Institut de Recherche en Technologies et Sciences pour le Vivant in Grenoble, France — the key for winning the ray is to avoid that the cells race back, changing direction.

And this is just the beginning: Théry says that they want to create other cell sports, like “cellular prowess in swimming and weightlifting.”