These Waves Are Made Of Clouds 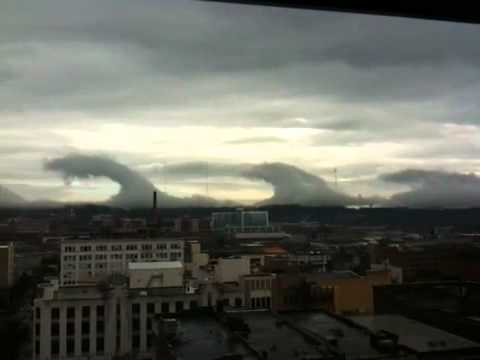 Think you’re looking at some gnarly surf off the coast of Hawaii? You’re way off. These curled peaks — known as Kelvin-Helmholtz wave clouds — actually formed over the land-locked city of Birmingham, Alabama.

The video shows the clouds in action, but a photo of the phenomenon posted by Reddit user alison_bee sparked a discussion about how they form. According to Redditor zensunnioracle, a purported meteorologist, the lowest layer of the atmosphere is more stable than the layers above it in the morning. As a result, wind shear between those layers is able to pull wisps of air from the stable layer into the upper ones, and as it cools, condenses, and is dragged along, it creates what looks like giant waves in the sky.

The same waves have been photographed in Saturn’s atmosphere, but while there’s sound science to explain them away, I don’t think it’s going to stop 2012 doomsayers from citing this as evidence of the world’s impending demise. [Reddit via TYWKIWDBI]