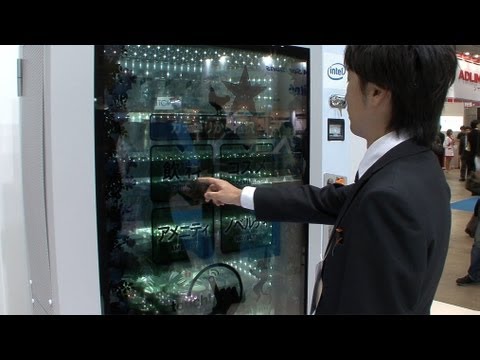 will take this subtly animated approach instead of horrifying advertisements.

This concept machine, created by Sanden, Okaya Electronics, and Intel, uses a monstrous 65 inch transparent HD display that still lets shoppers see the actual products being sold. And instead of just playing full screen commercials with music blaring, a series of simple silhouetted animations and menus are used to entice shoppers to give up their pocket change.

But the futuristic vending machine isn’t about improving the human experience, it’s still about effectively selling crap. So it’s also got a built-in camera that can identify the person using the machine as being male or female, young or old, providing advertisements and other animated content targeted towards their demographic. As long as it ensures there’s always Coke in stock so I don’t have to settle for a Sprite, they can bombard me with whatever they want. [DigInfo]