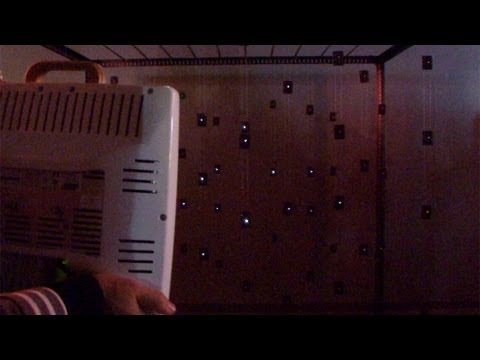 Using a regular speaker blasting out a narrow beam of sound, researchers have developed an LED that can actually be powered by nothing but audio. Providing a new way to deliver wireless power to devices from greater distances.

Developed by the Hirose-Tanikawa Group at the University of Tokyo, the new system uses an off-the-shelf speaker to deliver an ultrasonic sound wave which is converted into power by a special circuit board covered in microphones. The power yield isn’t staggering at this point, at a distance of about 20 inches the output is 10 mW, and that drops to just 1 mW at 16 feet. It’s enough to power low-energy electronics like LEDs and there’s certainly room for improvement.

The main advantage to using sound instead of electromagnetic waves for wireless power is that you can easily hear where the power source originates and is being sent. The signal is also easy to bounce and reroute, interrupt and even broaden, which could improve technologies like RFID. But I’m excited at the prospect of harnessing all the arguments and heated discussions during the holidays to power the lights on my Christmas tree. [DigInfo]