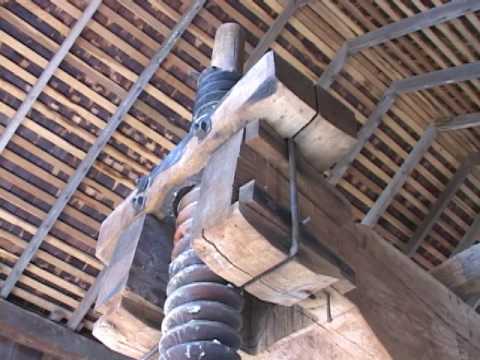 During the Civil War, apple cider was a valuable commodity. Not just because it was delicious, but because it made for a handy alcoholic disinfectant. (You do know what medicine was like back then, right?)

So a press able to churn out over 370 litres of the stuff a day must’ve been the 19th century equivalent to a tank factory for the Union.

The Hauenstein cider press was built — by hand and from memory — by Swiss immigrant F. William Hauenstein during the American Civil War from 1861 to 1864 at his family farm in Huntington County, Indiana. The timbers came from his farm but the design came from his recollection of smalller-scale wine-juicing operations that he had observed in his native Switzerland.

The system works by first grinding apples harvested from the orchard into a mash roughly the same consistency as apple sauce, using a chopper wheel — essentially a rolling barrel with sheared nail spikes that break down the fruit into mash. The mash is transferred to the mashing area, where it is layered alternately with fresh straw in a pressing bin. At that point, workers twist an enormous, hand-carved Red Oak screw, lubricated with lard, to jack a 9m long, 194sqcm, 1.8-tonne beam of white oak vertically, applying 18 tonnes of pressure to the apple mash bin. The juice is squeezed into a collection trough that feeds into a filling area, where the juice is pumped into jugs. On average, the press collects roughly 11 litres of unpasteurised apple juice from every bushel of fresh apples. The orchard processes roughly 45 bushels — 511 litres — of apples a day.

Originally, the Hauenstein clan turned the screw themselves, though that method quickly fell by the wayside in favour of horse and later internal combustion power. The White Oak beam — at the time of its chopping in 1860 — was nearly 400 years old, having sprouted roughly at the time that Columbus discovered North America. This press first saw operation in the fall of 1864 — it then ran continuously until 1972.

In 1991, the Hauensteins agreed to donate the massive press to the Swiss Heritage Village — the largest outdoor museum in Northern Indiana. It was dismantled, refurbished and reconstructed on the museum grounds. It’s still in operation today, with many of its original parts still intact and fully operational. Hauenstein actually expected that the original vertical screw and nut assembly that lifted the White Oak press arm to wear out relatively quickly, to the point that he built a backup set. However, after more than 100 years, the first screw and nut set are still used in the cider mill, showing very few signs of wear.