How To Auto-Milk Cows In The Middle Of A Desert 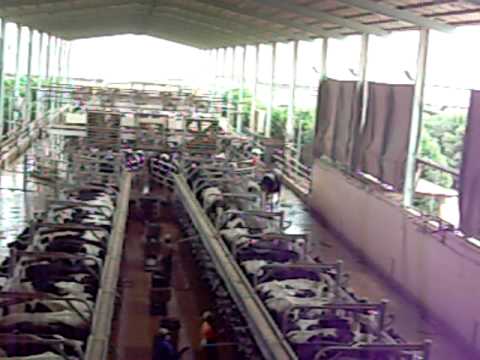 The middle of the Saudi Desert isn’t really the first place you’d think of as the location for the world’s largest dairy farm but that’s exactly where Al Safi Farms produces 600,000 litres of milk a day.

During the panics in 1973 in response to the oil embargo crisis, the Saudi Royal Family realised that their food supply infrastructure was grossly inadequate to effectively respond to external pressures or shortages. In response, the king decreed that his country would become self-sufficient in its food supply. (It’s good to be the king.) To accomplish this, the Saudi government heavily subsidised virtually every aspect of the food production system — from paying for farmers’ irrigation and harvesting equipment to paying the freight charges to import dairy cattle from Europe. Prince Abdullah al-Faisal’s farm, Al Safi, quickly grew to be the largest dairy farm in the kingdom. In 1998, the Guinness Book of World Records recognised it as the largest integrated dairy farm on the planet.

Established in 1979, Al Safi Dairy is located in the Al Sahba Valley, about 100km south east of Riyadh. It covers 3500 hectares of land, maintains a herd of 37,000 Holstein cattle, and is the primary supplier to the Al Safi Danone company.

As an integrated dairy farm, Al Safi manages the entire milk production process. It grows the hay that the cows eat; maintains and milks the herd; processes and packages the milk; and delivers the final product to stores across the UAE in Safi trucks. But it doesn’t look like a farm you’d see in the Midwest.

Al Safi’s fields are dry and brown. The cows are gaunt. That’s because temperatures in the Saudi desert can reach 120 degrees Fahrenheit, and fat cows can’t handle the heat. The farm uses Holstein Friesian cows from Europe and Canada to produce the farm’s daily 600,000 litres of milk. And the entire operation — milking parlours, processing, packaging and distribution — are all self-contained. Foraging materials like Alfalfa, Rhodes grass, Hay and Sorghum Sudani silage are all grown onsite, while the farm’s water supply comes from 2000m deep wells bored into the desert.

Why so deep? “The water from the aquifer is extremely hot and extremely aggressive,” says Fred Clise, export manager for Goulds Pumps’ water technology division told National Driller. The water is heated by geothermic activity in the region and contains minerals like calcium and magnesium which make it extremely corrosive. So, Al Safi Farm employs an 11-inch bronze and nickle alloy CHC submersible turbine pump located 1000m underground to force up cooler water from below. The 1000hp pump moves about 4500 litres/minute. The wells themselves have to be clad in 3-inch stainless steel to not corrode in the incredibly hot and hostile waters.

Once water is topside, it’s pumped into cooling ponds or through a circulating pipe system to evaporate the heat until it’s a safe temperature to drink. The well system provides not just the water for the herd (each head consumes between 70-115 litres of water per day) and irrigate the crops, but is also employed to help beat the scorching Saudi summers. Each cattle pen is also equipped with evaporative cooling systems and air-droplet cooling fans cool as well as special awnings for the cows to shelter under when the heat becomes too much.

Al Safi Farm runs 24 hours a day throughout the year. Every aspect of production is monitored by a custom built in-house software suite which allows workers to not only maximise production but keep herd diseases like Hoof & Mouth in check.

In order to extract the precious cow juice from more than 30,000 cattle, hand-milking simply isn’t feasible. Al Safi employs 14 fully automated milking parlours. Each milking parlour can process 120 cows every 12 minutes or roughly 3100 cows, three times a day. Milking units attach teatcups (“teat-cups” not “teacups”) to the heifer’s udder. The cups consist of a hard outer shell with a flexible lining, which allows the machine to milk a cow in a distinct way from the human hand or calf mouth. A continuous vacuum is applied to the inner liner, creating a pressure difference across the teat canal, which sucks out the milk. Unfortunately the vacuum also sucks blood into the teat, which jams up the process. So, once a second, the vacuum is released from the inner liner and the teat can relieve the congestion.