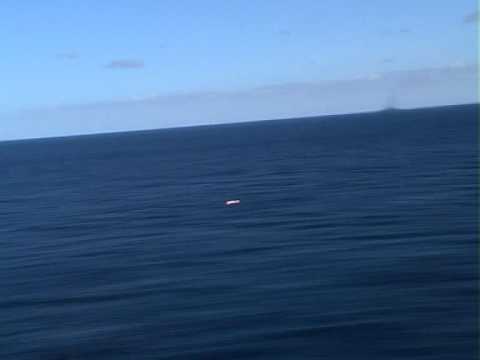 This is the Naval Strike Missile, Kongsberg’s latest and greatest cruise missile, as it skims over the Pacific Ocean before tearing into its target on the far side of an island.

The testing for this next-generation anti-ship missile took place off Point Mugu, California, in June of this year. According to Konsgberg, the NSM had only 1.5 seconds to acquire and positively ID the ship as its target before striking.

The state-of-the-art missile weighs about 400kg and has a range of 100 nautical miles, both along the coast and in the open ocean. It uses GPS, inertial and terrain reference systems to maintain its bearings. Being a cruise missile, and the only fifth-generation long range precision strike missile in existence, the NSM is capable of flying over land while avoiding obstacles and skimming just above the surface of the ocean to avoid radar detection. The NSM will also make a random high G-force manoeuvre in order to confound enemy countermeasures just before it strikes with a 125kg multi-purpose blast/fragmentation warhead. The NSM is also capable of independently detecting and recognising targets through its imaging infrared (IIR) seeker and on-board target database.

It’s being developed as the basis for the Joint Strike Missile program to be carried aboard Lockheed Martin F-35 Lightning II “Joint Strike Fighters” when they enter service. The Royal Norwegian Navy has also already chosen it for service aboard Fridtjof Nansen class frigates and Skjold class patrol boats as well as by the Polish Navy. [Wikipedia, Kongsberg]