Sony Distribution Centre Goes Up In Flames During London Riots 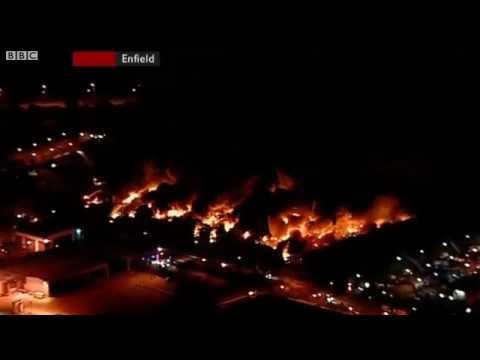 At midnight, the mob rule that’s descended over London and parts of the UK decided to attack the Sony distribution centre in Enfield, North London, with local Tommy Thompson telling the BBC how looters stole items including “Wii consoles”.

As Sony centres only sell Sony-branded products it’s more likely the thugs were thieving PS3s, but we’ll let Thompson off the hook as he sounds pretty worn out from being attacked himself. Jin Tominari, a Tokyo-based Sony spokesman, has stated that the warehouse only contained Blu-rays, CDs and DVDs, (though that doesn’t corroborate eyewitnesses’ reports), and while the company most definitely had insurance on the building and its contents, around 750 people are believed to be employed there.

So much for the thugs claiming they’re kicking off because they don’t have jobs due to the recession.

Dozens of videos shot by locals have been uploaded to YouTube, showing the roaring flames and billowing smoke over the large electronics centre, which some 40 firefighters were still battling to extinguish at 8am GMT this morning. The damage caused is incalculable at this time, though I’ve contacted Sony reps to ask for more information which hopefully they’ll provide soon. [BBC]