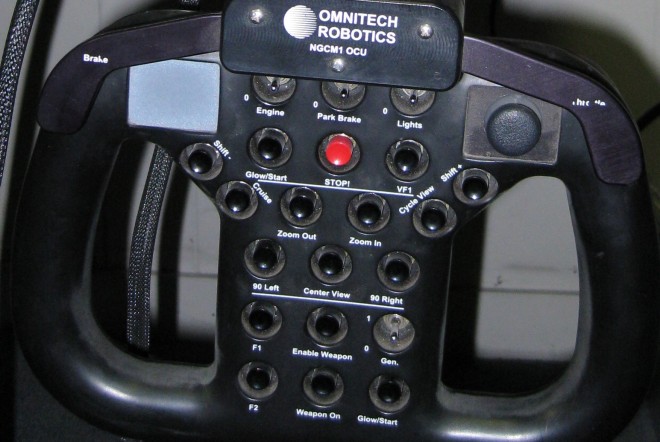 There was a time, not all that long ago, when the Pentagon sank tens of millions of dollars into remote-controlled lightning guns that it hoped would fry insurgent bombs before they killed any more troops. Now, disassembled parts from the one-time wonder weapons are being sold on eBay. At least one buyer snatched up the gear, hoping to use it in his latest art project for Burning Man.

All of which would make for a funny little story, if that buyer didn't discover that the multimillion dollar "Joint Improvised Explosive Device Neutralizers", or JINs, were kluged together from third-rate commercial electronics, and controlled by open Wi-Fi signals. In other words, the Pentagon didn't just overpay for a flawed weapon. On the off-chance the JIN ever worked, the insurgents could control it, too.

"This is the hack of all hacks," says Cody Oliver, a freelance technologist in San Francisco. "And this is what they were selling to the government? Holy shit."

OK, that story is kind of funny, too. In it's own dark way.

It started one day last April, Oliver says. He was brainstorming with sometime-employer, Elon Musk, about their next project for Burning Man. For the last three years, Oliver had built for Musk "art cars" - tricked-out jalopies - in the shape of rocket ships that Musk then drove around the festival. (Musk is the founder of the rocket-maker SpaceX, among other firms.) This year, Oliver suggested something different - a remote-controlled art car. Musk liked the idea. So Oliver started trolling eBay for robotic control systems.

He figured he'd get something industrial grade, that already had all the safety and interference issues sorted out. Oliver quickly found a pair of Omnitech Robotics NGCM1 controllers - the kind of high-end electronics that ordinarily sold for tens, if not, hundreds of thousands of dollars. Oliver bought a pair for a thousand bucks. He sent his dad down to a nondescript warehouse in Tucson, Arizona to pick the stuff up.

Oliver knew there was something different about these controllers almost as soon as he took them out of the crate. The steering wheel was outfitted with black buttons labelled "Enable Weapon" and "Weapon On." In the centre was a big red button marked, "STOP!"

Things got more curious when he started poking around the software. There was no password on the gear that was supposed to be outfitted on the robot, so he was able to type "root", and get right in. Then he checked out the operator's equipment, which ran a Java app on Windows XP. He decompiled it, and found a string in the code: "IONPaysBills=true".

ION was the stock market symbol for Ionatron, the company that managed to convince Paul Wolfowitz, the Deputy Defence Secretary during the early years of the George W. Bush administration, to give the firm $US30 million for its bomb-zappers. Shaped like golf carts, the remote-controlled JINs were supposed to use short-pulse lasers to carve conductive channels in the air. Electricity could then be sent down those channels, frying bombs from a safe distance. A company press release quoted Brig. Gen. Joseph Votel, head of the Pentagon's Joint IED Defeat Task Force as saying, "The Ionatron system was just the type of out of the box, new technology solution we're looking for."

But the JINs never quite lived up to their overheated claims. In early 2006, the Washington Post recounts, two JINs were flown to Afghanistan. At one point, "the kill switch failed and the device continued to fire bolts of electricity. Steep mountain terrain and poor roads also proved difficult; one JIN rolled downhill and flipped over."

Eventually, the Pentagon soured on the JINs. Ionatron lost most of its cash, changed its name, and got wrapped up in a series of shareholder lawsuits and insider trading scandals. A couple of years ago, the broken firm reached out to Tuscon's Southwest Liquidators, who helped clear the Ionatron warehouse of its useless inventory of electronics. "We took it all," says Southwest's Keith Tearne. Then they put it on eBay.

Oliver kept going through the strange gear he had indirectly acquired from Ionatron. The wireless router that was supposed to be mounted on the robot was a standard Linksys model, the kind that filled countless homes with Wi-Fi. There was no encryption, and no password to protect the information. Anyone could've tapped in. "All the video, all the commands, there were all in the clear, over standard 802.11 Wi-Fi," Oliver says, his voice rising.

There was one difference, though, between this Linksys router and a standard one: The tell-tale blue plastic had been removed, and the serial numbers were carefully shaved off. As if someone didn't want the government to know that they were using commercial parts.

That was fine by Oliver â€“ he was using the gear for Burning Man, not for Baghdad. But he figured he ought to e-mail the CEO of Omnitech Robotics, Ionatron's supplier, to find out what was up - and see if he could get some configuration files. "I also got a LOL on some of the code statements," Oliver wrote. "Guess this should read "TAXPaysBill = true'."

The CEO, David Parish, quickly answered back. "Those systems were sold to Ionatron under NDA [nondisclosure agreement]... If you openly disclose this type of information and violate NDA or copyrights, you and or Ionatron may be liable for infringement," he wrote. "Any use of the scrap parts you have is dangerous, at your own risk, and not authorised or supported by Omnitech."

"The random comments you noted in some files were software programmers attempt at humour, nothing more. I do not share their sense of humour, and take this compromise and potential threat seriously. I suggest you act responsibly and heed this warning," Parish added.

Oliver eventually dropped the idea of using the Ionatron gear for Burning Man - and not because of Parish's threat. The gear just seemed too jury-rigged. Its network detector was a wire connected to the "on" light on the front of the router.

The military, on the other hand, continues to have some faith in Ionatron's technology, investing additional millions into their lightning weapons. The Marines combined the JIN with a mine-roller, used to crush buried bombs. Then they hung the whole thing in front of a truck, and called it a "JOLLER." A May 2009, Marine Corps briefing (.pdf) shows the phallic contraption shooting electricity into the ground. "Lightening Bolt: Pricele$$," it reads.

At least, until it goes up for sale on eBay.