Transformers: More Than Meets The Ear

If you like robots, sound effects and tigers with emphysema (and who doesn’t?), Fast Company took a look at how the Transformers got their sounds.

The giant robots in the new Transformer movies are all computer-generated. The ear-rattling sounds, however, are 100 per cent real. Right down to the tiger with emphysema playing Megatron. Really.

This week, Michael Bay’s latest experiment on sensory overload, Transformers: Dark of the Moon, hit theatres starring Shia LaBeouf, Rosie Huntington-Whiteley, and a tiger with emphysema. Wait, what? Granted, the tiger with emphysema or the shrieking baboon that’s also in the film may not make the end credits, but both play major roles in making these ‘bots believable. Amid the CGI assault of explosion after explosion (after explosion), a viewer may not be attuned to the aural craftsmanship (e.g. a tiger with emphysema) that went in to the third Transformers film. But it’s there. In fact, 99 per cent of the sounds are original recordings, according to Oscar-winning sound editor Ethan Van der Ryn, who’s worked on all three films. Below, Ven der Ryn walks us though five of characters and scenes and reveals how he made real sounds larger than life. 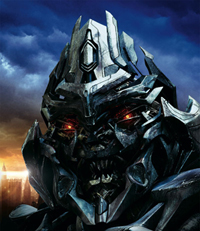 Megatron There’s a tiger that has emphysema that we used for a lot of the growls. Most of Megatron is voiced by Hugo Weaving, but there were moments when we wanted to get more animalistic with him – a little more violent. We went to this animal park just hoping to get cool sounds from animals with no specific idea of what we would use the sounds for and the tiger just happened to have, lucky for us, emphysema – so it had this crazy kind of asthmatic wheeze that ended up working well. A lot of the times in our business, some of the best things come from happy accidents.[imgclear]

Shockwave There’s a baboon, actually, that we were able to record and we ended up using it for some vocal for the driller – Shockwave’s driller guy that tears through the streets and the buildings. He’s got this sort of crazed scream that he lets out at times when he’s attacking and that’s actually a baboon howl. One of my favourite sounds in the movie is from that same robot, the driller. There was a party outside of our editing rooms one day and the caterers left this big chunk of block ice that they were serving gelato out of – it was maybe a 18kg block of ice that’s melting – we got this fantastic series of almost vocalish, kind of gritty, rip roars just from this melting block of ice sliding on concrete.

Soundwave One of the cool things about Soundwave, there’s a moment when Rosie Huntington-Whiteley’s character is trapped inside the car and the tentacles all come out and start attacking her. There’s a guy, Frank Welker – who voiced Megatron in the original Transformers cartoon from the ’80s – he’s fantastic at doing creature vocals. So he took a stab at doing the sounds for the tentacles that are coming out of the car and approaching her and those ended up really working out well in helping to sell that moment.

Decepticon Mothership Over Chicago One of the cool things was dry ice vibrating against sheet metal, which we were able to use for the mothership hovering sound. When dry ice is on contact with sheet metal it causes it to start vibrating – it’s this cool tonal vibration, basically. A sort of singing vibration. When the ship crashes, that’s actually an elephant trumpet slowed way down. It has a sort of organic feeling to it – organic yet electronic.

The Skydive Over Chicago That’s one of the first scenes that we actually started working on and I was overjoyed by it because I thought of it as an opportunity to get quiet. Which, in any action film, is really one of my key motivators. It’s really something I’m looking at from the very beginning, the places to quiet the effects track down. Especially if we’re going to play it real, to put us there with these guys just floating through space in those squirrel suits and all you would hear, really, is the wind just whipping by their ears. When they pass by, we just hear this “pfft, pfft” – this real tight slicing. We did a whole series of whooshes by just whipping things right by a mic, like a spatula or a cheese grater, just to get these realistic, tight slicing whooshes. The one other thing I did with the scene – something I’ve wanted to play with since the first Transformers movie but didn’t make it happen until this movie. So we fired up an electric guitar and got a whole palette of licks that we were able to apply in some moments. At the end of the flying squirrel sequence, the guys shoot through a gap in the building, the ship tries to follow them and crashes and goes spinning by camera. That scene finishes with just this single piercing almost Jimi Hendrix guitar lick. That’s a moment that I love because it’s so powerful and feels completely out of control. And that sound became one of our signatures for the alien ships.

Sentinel Prime, Voiced by Leonard Nimoy We took it as an opportunity to really play with the electric guitar sounds, integrating that in with a lot of his motors and movements. So he has this real electronic feel to him. Originally we were just planning on holding all of the electronic sounds for the Decepticons, but we started playing around with them for Sentinel and liked the way that they felt. And realised, in a way, it made sense to use them – it’s such a subtle thing, A lot of the stuff we’re doing is really subtle, in a way – stuff that most people wouldn’t pick up on and, in fact, shouldn’t pick up on. That’s the thing about sound work; you almost don’t want to be noticed because, usually, it gets noticed when there’s something wrong with it. If it’s working properly, when you’re watching the movie, you just go with it.