Jellyfish and Chips Could Be a Radical Alternative to Save Australia’s...

Here’s Why A Monorail Kind Of Sucks 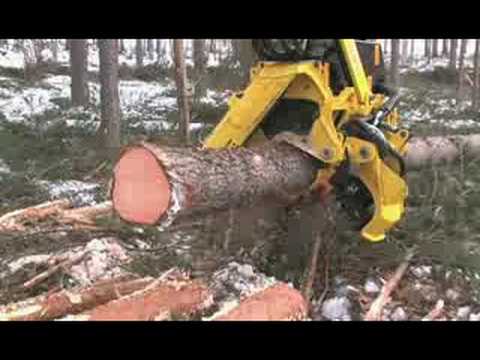 At the turn of the 20th century, the logging industry relied on armies of lumberjacks swinging axes and band saws to fell a forest. These days, we just send in Harvesters.

A Harvester is a multi-function forestry machine used to fell, de-limb, and stack trees for transport to processing. Development of what would become the modern Harvester actually began in post-war Finland with the creation of tractor-driven sledges and half-tracks. In the ’60s, companies like Valstar created new designs for forwarders and Fiskars began mass producing hydraulic cranes and lifts. Then, in 1973, PIKA engineer Sakari Pinomäki combined all of these innovations into the PIKA 50. Its successor, the PIKA 75, became the first commercially sold harvester.

But that was in 1973, and it might as well have been nineteen-seventy-stone-age. Because, these days, loggers have tools like this: the John Deere H414 4-wheel drive Harvester Head. This tree-butcher sits at the end of a hydraulic crane attached to a model 1170E Harvester. It first grabs hold of the tree near its base and slices through it with a hydraulically driven 30-inch chainsaw. Four motors pull the tree through the head and, while the H414 runs up the length of the stem at nearly 17 fps, four moving (and more two fixed) delimbing knives shear off branches as it goes. The tree is then cut to length and stacked to await loading onto a Forwarder for transport to a lumber lard. This harvester head can take down a tree up to 24 inches in diameter.