The Human-Powered Helicopter That Hopes To Take Flight 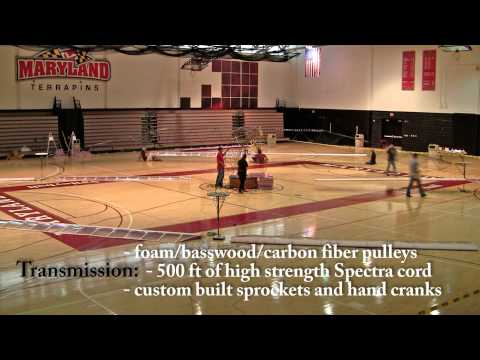 A team from the Clark School of Engineering at the University of Maryland is hoping to take to the skies in their human-powered helicopter tomorrow.

The students are competing for the $US250,000 Sikorsky prize, a competition started by the American Helicopter Society in 1980. The prize requires competitors have to fly a homemade helicopter for 60 seconds at an altitude of three meters. It must be a controlled flight so each pilot has to stay within a 10-metre square. In 11 years of competition, the prize is still up for grabs.

The Maryland team hopes to win with “Gamera”, an X-shaped helicopter made of balsa wood, foam mylar and carbon fibre. Each crossbar of the X-frame is 18 metres long and each rotor is 12.8 metres in diameter. With the female pilot on board, the helicopter is a svelte 95kg. The pilot sits in the middle of the contraption and uses only her hands and feet to power the rotors. Pedal power, for the win.

The team made their first attempt at flight on Wednesday but encountered problems with the chain that connects the gears to the rotors. They have one more night to fix the chain and will attempt another flight tomorrow morning. You can follow their flight via Twitter (@ClarkSchool) or a live video stream. The big take-off is scheduled for 11 am EDT on Thursday. [Clark School of Engineering]