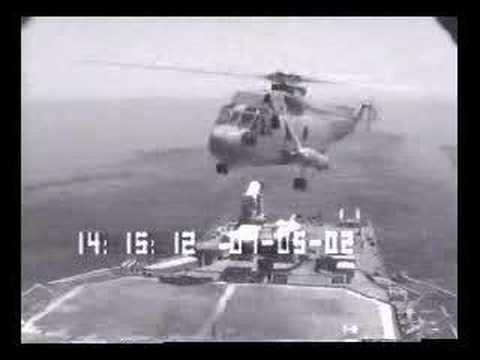 I always imagined that landing a moving thing on another moving thing would be pretty hard, but I also thought that helicopters would be easier than airplanes. As these videos demonstrate, I was very wrong.

Since helicopters often land on a smaller ship, the latter are more susceptible to move heavily when there’s bad weather – something that is not the case of a 100,000 supercarrier. This video shows an “operating limit development” test of a Lynx Mark 90B helicopter, landing on rough seas on the deck of Knud Rasmussen class patrol vessel from the Royal Danish Navy.

This US Navy CH-46 Sea Knight, however, didn’t have much luck when the pilot partially missed the landing deck.

This Sea King doesn’t crash because of the weather, but because a problem in his tail rotor.