Your Hands Give Away Your Hotness 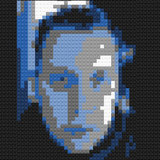 The ratio of length between a man’s second and fourth fingers (2D:4D) is thought to be linked to the amount of testosterone he received in the womb. According to new research, it also shows something else: how attractive a man’s face will be to women.

The research looked at the relationship between the 2D:4D ratio, how attractive women thought the face was, and other signs associated with attraction and testosterone production: body smell and voice.

Men with a lower 2D:4D ratio (shorter pointer and longer ring fingers) were thought by the subjects to be more attractive, have more “masculine” features, and have more symmetrical faces.

However, the men’s smell and voices – both of which are linked to testosterone levels and attraction – didn’t correlate with the ratio. Scientists say this implies that facial structure is influenced by the hormone during pregnancy, and voice and odour by testosterone levels later in life.