Women Fight With Police At IHOP As Boba Fett Looks On 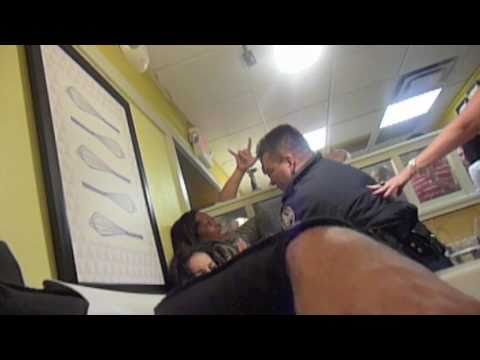 It’s not just McDonald’s – early on Sunday morning, a fight broke out between police and patrons at an Atlanta-area IHOP. Of course, the fight showed up on YouTube – and Boba Fett was involved.

According to the Atlanta Journal-Constitution, the fight started around 4am on Sunday when an off-duty police officer apparently working at the Buckhead, GA IHOP “shouted at a woman sitting in the corner of a booth near the door and then he lunged at her”. A second woman got involved – the officer punched her in the face, they continued to scuffle, and she was eventually arrested. You can watch the fight in the video above, or read the blow-by-blow AJC account, culminating with “the woman in the black dress, shoeless, was led out of the restaurant”.

A friend of the woman says her arrest was unjust:

I felt so bad for her, for anybody to go through that. It was very obvious that the first officer had contained her. No one would tell us why we were arrested, no one would tell us anything. And we wind up spending over 24 hours in jail.

Off-duty police officers getting into early-morning fights at IHOP does seem like something the Atlanta Police Department would want to nip in the bud. They’ve released this statement:

The Atlanta Police Department is aware of the incident that took place early Saturday morning involving one of its officers attempting to arrest a patron at an IHOP in Buckhead. The matter has been referred to our Office of Professional Standards to determine whether department policies and procedures were followed. Further comment at this time would not be appropriate.

As you’ll notice in the video, the fight was also witnessed by Boba Fett and one “hip hop Storm Trooper“, who had arrived at the IHOP for their 4am refuelling. Here is Fett’s statement:

Iam boba fett in the video and they got what they deserved … I almost jumped in and shot a﻿ few girls with my gauntlet darts !!! I just wanted to eat my eggs and bacon in peace Damm it !!