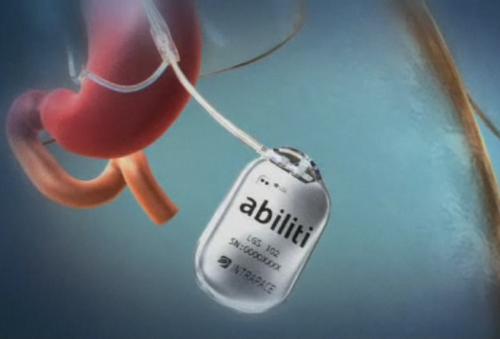 Forget stomach stapling and lap band surgery. The next big thing in weight loss surgery may be the stomach pacemaker.

Designed by pacemaker manufacturer Intrapace, the abiliti stomach pacemaker is purportedly the first "intelligent" form of obesity intervention. Instead of simply constricting the stomach, the surgically-implanted pacemaker detects when a patient downs food or drink, and zaps the stomach with a series of electrical impulses to generate a feeling of fullness (the system utilises the nerves around the stomach that signal fullness to the brain). As a result, patients eat less than they would normally.

The system goes beyond just zapping the stomach. It also collects information about food consumption and exercise, all of which can be downloaded to the doctor's office or shared in the abiliti online community.

Of the 65 patients who have used abiliti in clinical trials, half have kept the pacemaker in for a year (it lasts for up to five years)—and the majority of those patients lost 20% of their weight, according to the AP.

The pacemaker, which was approved for sale this month in the EU, costs $US24,040 including implantation. Some patients have reported infections caused by the surgery, but by and large, the pacemaker seems easier to stomach than lap band or stapling surgery. It doesn't make patients sick when they overeat; it painlessly stops them from doing it in the first place.

The stomach pacemaker is expected to go on sale in the U.S. by 2014, at which point Intrapace can really find out if its device can stem the obesity epidemic.

Latest Coronavirus Science: Heart And Brain Damage May Be More Common Than We Thought

Ed Cara 07 Apr 2020 5:01 AM
New research and surprising developments are teaching us more about covid-19 and the coronavirus that causes it.