The Day Steve Jobs Dissed Me In A Keynote 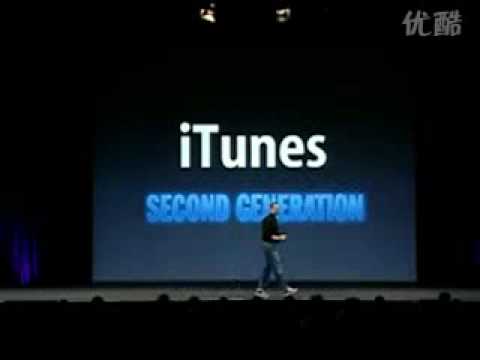 It was October 2003 and Steve Jobs was on stage for a special worldwide simulcast keynote speech about iTunes. About four minutes into the presentation, he said something that made my pounding heart sink to my burning stomach.

In May 2003, Apple invited me to their headquarters to discuss getting CD Baby‘s catalog into the iTunes Music Store.

iTunes had just launched two weeks before, with only some music from the major labels. Many of us in the music biz were not sure this idea was going to work. Especially those who had seen companies like eMusic do this exact same model for years without big success.

I flew to Cupertino thinking I’d be meeting with one of their marketing or tech people. When I arrived, I found out that about a hundred people from small record labels and distributors had also been invited.

We all went into a little presentation room, not knowing what to expect.

He was in full persuasive presentation mode. Trying to convince all of us to give Apple our entire catalog of music. Talking about iTunes success so far, and all the reasons we should work with them.

He really made a point of saying, “We want the iTunes Music Store to have every piece of music ever recorded. Even if it’s discontinued or not selling much, we want it all.”

This was huge to me, because until 2003, independent musicians were always denied access to the big outlets. For Apple to sell all music, not just artists who had signed their rights away to a corporation, this was amazing!

Then they showed the Apple software we’d all have to use to send them each album. It required us to put the audio CD into a Mac CD-Rom drive, type in all of the album info, song titles and bio, then click [encode]for it to rip, and [upload]when done.

I raised my hand and asked if it was required that we use their software. They said yes.

I asked again, saying we had over 100,000 albums, already ripped as lossless WAV files, with all of the info carefully entered by the artist themselves, ready to send to their servers with their exact specifications. They said sorry – you need to use this software – there is no other way.

Ugh. That means we have to pull each one of those CDs off of the shelf again, stick it in a Mac, then cut-and-paste every song title into that Mac software. But so be it. If that’s what Apple needs, OK.

They said they’d be ready for us to start uploading in the next couple weeks.

I flew home that night, posted my meeting notes on my website, emailed all of my clients to announce the news, and went to sleep.

When I woke, I had furious emails and voicemails from my contact at Apple.

“What the hell are you doing? That meeting was confidential! Take those notes off your site immediately! Our legal department is furious!”

There was no mention of confidentiality at the meeting and no agreement to sign. But I removed my notes from my site immediately, to be nice. (You can see still a copy someone posted here.)

All was well, or so I thought.

Apple emailed us the iTunes Music Store contract. We immediately signed it and returned it the same day.

I started building the system to deliver everyone’s music to iTunes.

I decided we’d have to charge $US40 for this service, to cover our bandwidth and payroll costs of pulling each CD out of the warehouse, entering all the info, digitizing, uploading, and putting it back in the warehouse.

5000 musicians signed up in advance, each paying $US40. That $US200,000 helped pay for the extra equipment and people needed to make this happen.

Within two weeks, we got contacted by Rhapsody, Yahoo Music, Napster, eMusic, and more – each saying they wanted our entire catalog.

Maybe you can’t appreciate this now, but the summer of 2003 was the biggest turning point that independent music has ever had. Until that point, almost no big business would sell independent music. (That’s why I had to start CD Baby, because nobody would sell my music.)

By iTunes saying they wanted everything, then their competitors needing to keep up, we were in! Since the summer of 2003, every musician everywhere can sell all their music in almost every outlet online. Do you realise how amazing that is?

But there was one problem.

iTunes wasn’t getting back to us.

Yahoo, Rhapsody, Napster and the rest were all up and running. But iTunes wasn’t returning our signed contract.

Was it because I posted my meeting notes?

Had I pissed-off Steve Jobs?

Nobody at Apple would say anything. It had been months.

My musicians were getting impatient and angry.

I gave optimistic apologies, but I was starting to get worried, too.

Then in October, Steve Jobs did a special worldwide simulcast keynote speech about iTunes.

People had been criticizing iTunes for having less music than the competition. They had 300,000 songs while Rhapsody and Napster had over 2 million songs. (Over 500,000 of those were from CD Baby.)

Four minutes in, he said something that made my pounding heart sink to my burning stomach:

“This number could have easily been much higher, if we wanted to let in every song. But we realise record companies do a great service. They edit! Did you know that if you and I record a song, for $US40 we can pay a few of the services to get it on their site, through some intermediaries? We can be on Rhapsody and all these other guys for $US40? Well we don’t want to let that stuff on our site! So we’ve had to edit it. And these are 400,000 quality songs.”

I’m the only one charging $US40. That was me he’s referring to.

Shit. OK. That’s that. Steve changed his mind. No independents on iTunes. You heard the man.

I hated the position this put me in.

Ever since I started my company in 1998, I had been offering an excellent service. I could make promises and keep them, because I was in full control.

Now, for the first time, I had made a promise for something that was out of my control.

So it was time to do the right thing, no matter how much it hurt.

I decided to refund everybody’s $US40, with my deepest apologies. With 5000 musicians signed up, that meant I was refunding $US200,000.

Since we couldn’t promise anything, I couldn’t charge money in good conscience.

I decided to make it a free service from that point on.

The next day, we got our signed contract back from Apple, along with upload instructions.

We started encoding and uploading immediately.

I quietly added iTunes back to the list of companies on our site.

But I never again promised a customer that I could do something beyond my full control.

Derek Sivers is best known as the founder of CD Baby. A professional musician (and circus clown) since 1987, Derek started CD Baby by accident in 1998 when he was selling his own CD on his website, and friends asked if he could sell theirs, too. CD Baby was the largest seller of independent music on the web, with over $US100M in sales for over 150,000 musician clients. After he won the 2003 World Technology Award, Esquire Magazine’s annual “Best and Brightest” cover story said, “Derek Sivers is changing the way music is bought and sold… one of the last music-business folk heroes.” In 2008, Derek sold CD Baby to focus on his new ventures to benefit musicians, including his new company MuckWork where teams of efficient assistants help musicians do their “uncreative dirty work”. His current projects and writings are all at sivers.org and his blog. If you’d like to keep close track of Derek, you can follow him on Twitter.