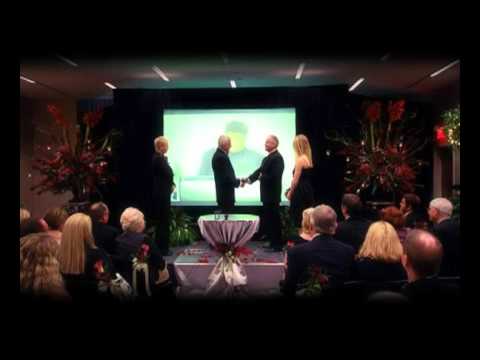 Mark Reed and Dante Walkup had been together for 10 years when they decided to get hitched. There was one problem: they wanted to be wed at home, in Texas, where gay marriage is illegal. So they fired up Skype.

Determined to marry amongst friends and family in Dallas, Reed and Walkup turned to technology to make their dream wedding come true. They traveled to Washington DC, where they applied for and received a Certificate of Marriage. Then they found Officiant Shiela Reid-Alexander to preside over the ceremony back in Dallas.

On their big day, the Dallas banquet hall had all the usual trappings of a wedding, but it also had an AV system and an internet connection. On a screen behind the grooms, Reid-Alexander appeared via Skype to officiate the ceremony remotely from D.C., where gay marriage is legal. Explains blogger Jay Morris, who was in the crowd in Texas:

In order for Dante and Mark’s wedding to be legal in Washington, D.C., the ceremony had to be performed by an official authorised by the District to conduct weddings.

To overcome the jurisdictional issues, Mark and Dante arranged for the officiant to appear via Skype along with several witnesses in D.C., while the couple stood within the boundaries of their home state before their friends and family.

I think it’s safe to call this the best Skype session ever. [YouTube via BuzzFeed]