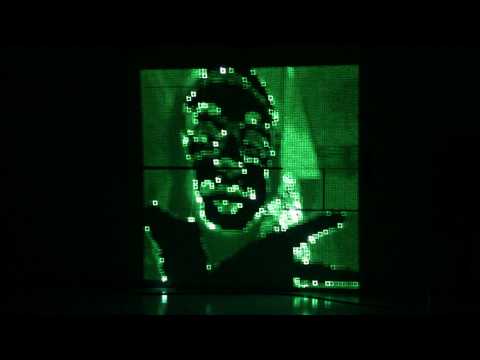 Apparently, firing a 405-nanometre ultraviolet laser beam at your face doesn’t kill you. It just turns you into a creepy zombie, using a system called Fade Out. This is how it works.

Invented by Japanese artists Daito Manabe and Motoi Ishibashi, Fade Out creates images that glow in the dark using a 405-manometre laser beam. First, their software analyses the source image, turning it to greyscale and determining the intensity of each pixel. Then it fires the laser to different points in the canvas – in the case above, on a face – timing the firing so the pixels fade in synchronisation. By the time the last pixel is fired, the ones fired at the beginning have already faded to the point in which they are almost gone. The process creates the highlights and the shadows necessary to create the image.

You can see it more clearly in this other video:

According to the artists, the process could be used in entertainment. Because firing ultraviolet light on your face is a whole lot of fun. [WBS via Pink Tentacle]