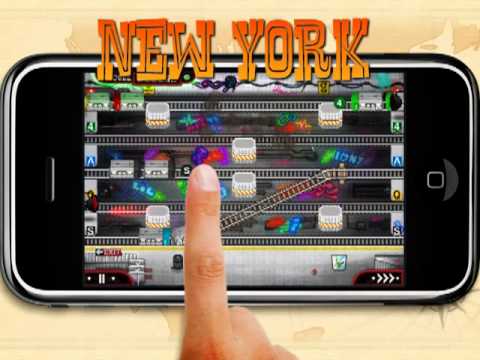 Train Conductor 2 is the sequel to Train Conductor and brings the time-management rail action to America (instead of the original’s Australia). The five levels in the game include New York City, Miami Beach, Las Vegas, Grand Canyon and Nashville, with each city offering their own unique feel and obstacles. They’ve also improved on the original game with refreshed graphics for the iPhone 4 and iPad and a new HUD (heads-up display).

The premise of the game is simple, get the highest score you can by safely directing as many train as you can. Some trains are faster than others, some trains are longer, some trains come in opposite directions, so you’ll have to be quick with your fingers to avoid a crash. These type of games are super fast-paced and so easily digestible that they get incredibly addicting. I’d say it’s definitely worth the $1.19. Works with iPhone/iPod Touch and iPad. [Train Conductor 2]