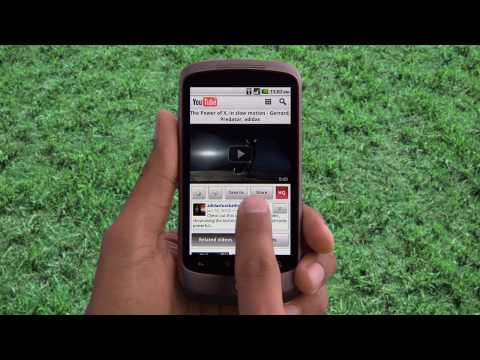 While everyone and their mother has an app these days, Google’s decided to emphasise YouTube’s mobile site as the wave of the future. It’s faster and more feature-filled than the YouTube app; they even made a video to prove it.

Crucially, the video quality is much better. There are also features packed into the mobile site that aren’t available on the app, including the option to like or dislike a video, suggested search results and the ability to create playlists. According to Google, the YouTube site can also be updated more quickly and frequently than native apps, meaning that mobile browser users will get the best of YouTube first.

It’s clearly a bid by Google to acclimate people to web-based apps, and why shouldn’t they? A native app like YouTube on the iPhone is subject to the whims of Apple – as a small for instance, the YouTube app still uses the five-star rating instead of thumbs up or thumbs down – while on the web Google is master of its own domain. It also, as Google points out in its own blog post on the subject, allows for a more consistent YouTube experience across platforms.

Will it be enough to get people firing up their mobile browser instead of tapping their adorable YouTube app icon? I’m guessing no, not yet. But if the quality and feature gap continues to grow, it’s only a matter of time.

It’s well known that the mobile internet is huge and growing fast; what’s surprising is exactly how fast. According to a recent report, within 5 years more users will connect to the internet via mobile devices than desktop PCs. YouTube consumption on mobile devices has also grown considerably — playbacks were up 160% in 2009 over the previous year. And we’re excited to announce that YouTube Mobile now receives more than 100 million video playbacks a day. This is roughly the number of daily playbacks that YouTube.com was streaming when we joined forces with Google in 2006.

We launched YouTube on mobile devices in 2007 with about 1,000 videos available on the mobile site (m.youtube.com). While this suddenly opened up the possibility to access videos on the go, our site, mobile browsers and the hardware had limitations that prevented the mobile experience from keeping up with YouTube on the desktop. Today, more than ever, we know that you want to be able to find and access your favourite videos wherever you are. That’s why we’ve been working hard to roll out an updated version of the mobile site.

* It incorporates the features and functionality you’ve come to expect from the .com site, like search query suggestions, the options to create playlists,the ability to designate “favorite,” “like,” or “unlike” videos directly from your device.

* As we make improvements to Youtube.com, you’ll see them quickly follow on our mobile site, unlike native apps which are not updated as frequently.

As the world continues to go mobile, we think this is a great improvement for users who want a more consistent YouTube across many devices, no matter where they are. We’re launching in English only today, but will be rolling it out in other languages in the coming months. You can access the latest YouTube mobile site from your iPhone or Android browser. To learn more, visit m.youtube.com to check out the latest improvements.