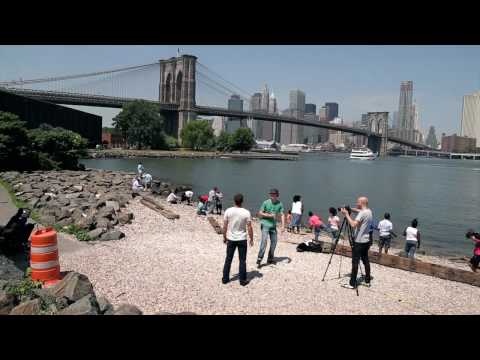 Have you seen this incredible Levi’s viral ad? A person walks coast-to-coast across America in stop motion. It’s basically a commercial, but the effect is genuine. A group of guys travelled across the US, grabbing one shot at a time:

Note that the equipment was absurdly simple: a DSLR (Canon EOS 5D Mark II), a protractor, a tripod and a tape measure. It's humbling to realise that pretty much any of us have the resources to make such a piece. (Heck, most of us even have the 14 days of holiday time to do it.)

Even movies like Corpse Bride were shot on consumer-grade cameras, as stop motion has always been a game for the patient as much as the rich. But still, the commercial reminds us just how far digital technologies have come.

Cameras and video editing equipment are becoming the new oil paints: Not necessarily inexpensive, but inexpensive enough for almost anyone to create a spectacular, professional-grade product - assuming they have the skill and creativity.

For those of us who always thought we could compete with the Spielbergs of the world if only given a chance, well, it appears our chance has just about arrived. Consider that bluff called. [Petapixel and Planet5D]